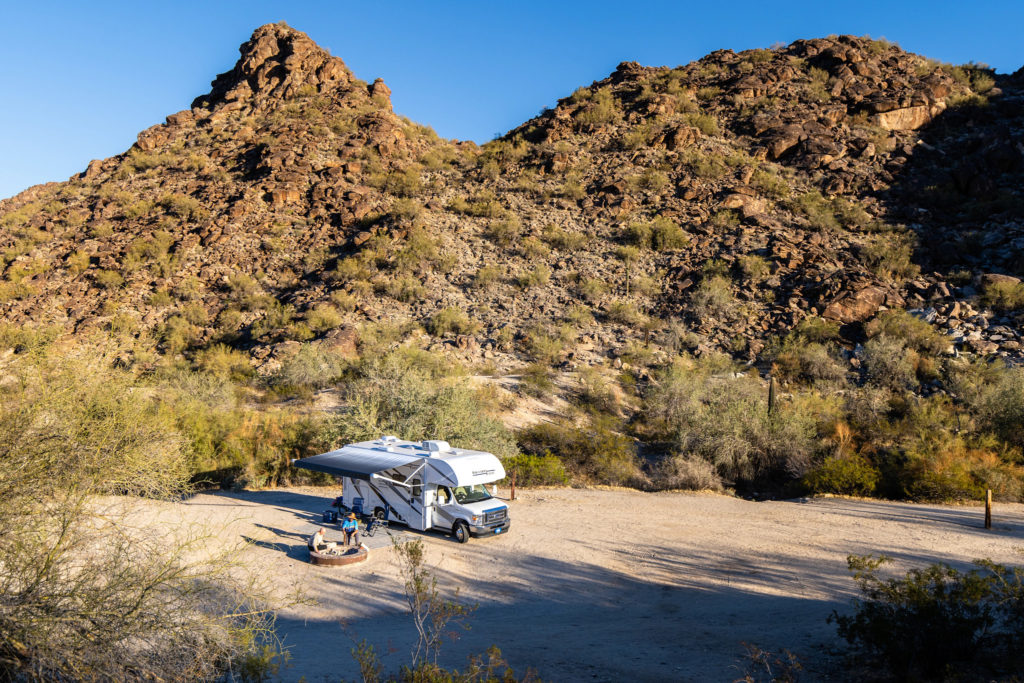 The Southwestern United States is one of the most unique areas in the entire world. From the glorious and desolate deserts to the dramatically dark skies full of stars, this area has something that everyone should see.

While you can RV to any place in the country, the Southwest is perhaps the best place for an RV road trip. The sprawling area is home to beautiful canyons, amazing national and state parks, and the bright sun and warm weather make it a perfect place for outdoor fun.

When we think of the Southwest, we think of Nevada, Arizona, Utah, and New Mexico, though parts of California definitely apply here. All of these states have the features commonly associated with the Southwest, and you should take advantage of this wide expanse of land that’s ripe for adventuring.

One of the best things about exploring the Southwest in an RV is that much of the land here is Bureau of Land Management (BLM) land. The nice thing about this is that you can camp on BLM land for free. You’ll be boondocking, but if you’re open to camping without an electrical or sewer hookup, you can stay in some of the most breathtaking places in the country.

Highlights of the Southwest

Let’s take a look at some of the places in the Southwest that you simply cannot overlook. These are just a few of the places you can check out. The possibilities are practically endless in this area of the country.

If you’re looking for one of the best photo opportunities you’ll ever find, then you need to head to Antelope Canyon in Northern Arizona. The unique slot canyon east of Page. Arizona is an amazing example of erosion. Looking like it was designed by an artist, the slot canyon is basically a massive sandstone sculpture.

Crafted through millions of years of water erosion, the fluidity of the canyon will have you in absolute awe. The walls of the canyon reach up some 120 feet above the stream bed, meaning you’ll be able to wander along the red-tinted walls in swirling delight.

Exploring all that Antelope Canyon has to offer is encouraged, but you will have to go through a tour company. There are several companies operating tours. The tours are also a fantastic way to learn as much as possible about this unique place, and its proximity to other destinations in the area means this can be just one of the many stops in your Southwest adventure.

Yep, a trip to the Southwest would not be complete without visiting Grand Canyon National Park. Although this might be one of the more crowded national parks in the region, it’s still worth seeing, especially if you have never been before.

One thing you’ll have to remember to figure out is which part of the Grand Canyon you’d like to visit. There’s the North Rim and the South Rim. Generally, the South Rim is the one that people think of when they think of this national park. It’s the one that appears in calendars, magazines, and all across the Web regularly. Still, the North Rim is spectacular, too. It’s also often less crowded, which can be a major plus, especially if you plan on visiting during the park’s busy season.

Regardless of which rim of the Grand Canyon you choose to visit, you’re bound to have a camping trip filled with epic views, wildlife sightings, and much more. Many people come back to this national park more than once, and that’s a great way to see the canyon from multiple angles. If you plan on spending a lot of time here.

Consider doing a few days on the South Rim and then a few days on the North Rim. It’s important to note, however, the drive from one rim to the other is around four and a half hours. That’s no quick trip, but it can be one of the best ways to explore the area, and if you’re visiting the Grand Canyon, you want to explore.

Known as the Icon of the Southwest, Saguaro National Park is located just outside of Tucson, Arizona. This place is home to the nation’s largest cacti. The monstrous saguaro is a universal symbol for the American west, and it’s reason enough to visit this national park, though there is so much more to see and do here.

The city of Tucson is near the park. It’s a thriving place and can be a good stop-off after a long few days exploring the park. There’s also plenty of campgrounds just outside of Tucson, so you could simply stay at one of these campgrounds and split your time between Tucson and Saguaro National Park.

Let’s move out of Arizona for a bit and up into Utah, another one of the great states that fit into the Southwest. Utah is known for many things, but Arches National Park is the one you truly want to see here. It’s full of unique rock formations.

Often called a red-rock wonderland, you’ll find over 2,000 natural stone arches and hundreds of pinnacles, rock fins, and giant balanced rocks. It’s truly a sight to behold, and you’ll wonder just how these formations came to be even though you’ll know they developed over millions of years worth of erosion.

Arches National Park is a hiker’s paradise and there’s so much to see and do here for hikers of all skill levels. You can also go horseback riding, canyoning, bicycling, and more. No matter what activity you choose to do, you’ll find yourself surrounded by what almost looks to be an alien environment. This place is simply a must-see.

Want to feel like you stepped back in time on a geological journey? Then you need to visit Bandelier National Monument in New Mexico. The area is one of the most beautiful in the entire state and features rugged canyons and mesa country unlike any other.

This place is also a history lover’s delight. There’s evidence of humans here going back over 11,000 years. You’ll find petroglyphs, remains of dwellings, and crumbling walls that once stood tall. There’s also plenty of wildlife to see in this area and around 33,000 acres of land for you to explore.

Bandelier National Monument is close to Santa Fe, and that means many of the campgrounds you’ll find in the area are located in or close to the city. The park is a little bit further out. If you use Santa Fe as your basecamp, you’ll have plenty to see in the city, too. Also, the Santa Fe National Forest is just a little to the east, so there’s even more space for you to roam.

Ask an RV Pro: 10 Camping Tips That Will Transform Your Travels 97511