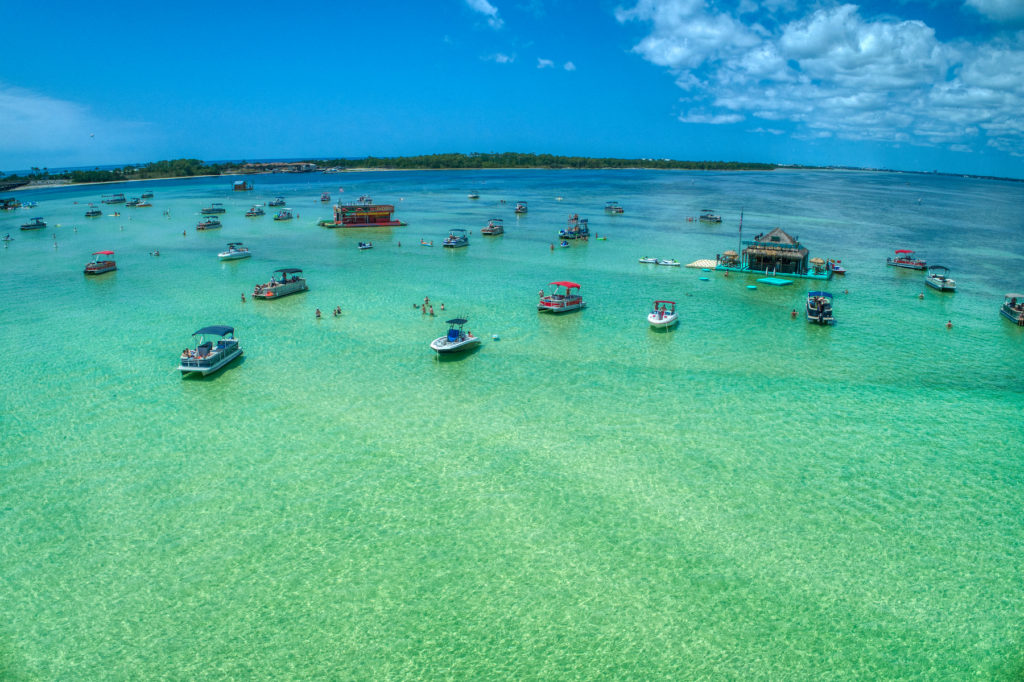 Snowbird season is just around the corner. And if you are frustrated trying to find a winter camping destination that isn’t all filled up by those who made early reservations (sometimes a year in advance!), check out these unsung snowbird destinations. While not entirely undiscovered, these warm destinations are still great locations where you probably can find some openings for the 21-22 season.

The most popular RV snowbird states are Florida, Arizona, and California. These states see a “flock,” of winter visitors, and that’s been a given year in and year out, with and without COVID.

But, four other states are also great snowbird spots that deserve to be on your radar. Consider Alabama, Mississippi, Texas, and New Mexico.

When is Snowbird Season?

In general, the snowbird season is from November 1 to March 1. There are two waves.

It’s a toss-up to which one is the most popular, though RVers hoping to snag a seasonal site get the best placement if they book through the entire four-month period.

When do you need reservations for a snowbird destination?

The earlier the better. Most bookings by RV resorts and campgrounds start taking reservations for the next snowbird season right after the current one ends. In other words, early March. By June, many campgrounds are mostly filled with snowbird reservations starting Nov. 1. By the end of August, seasonal reservations will be hard to come by…Hard. Not impossible.

Here are some of our favorites.

Florida is a huge destination for RVers, especially those from cold climates hoping to escape the snow and nasty winter weather. For those who like to flee for the whole season – called snowbirds because of their annual migration patterns, it is a particularly attractive place to go. They don’t call Florida “The Sunshine State” without a reason!

The most popular snowbird destinations in Florida are generally south of Sarasota. There, it’s rare for daytime temperatures to dip below 70. The next most popular region is the central part of the Florida peninsula, near Orlando. Temperatures during the coldest part of the season run between 60 and 70, sometimes a bit more.

Up in the northern part of the peninsula and the panhandle, winter daytime temperatures usually run in the upper 40’s to near 60. Some days in mid-February, it can approach 70. Nights can drop into the mid to upper 30’s. The ’40s are more typical.

Think of it this way: Even in Northern Florida and the Panhandle, you can get a suntan most days. And you usually can play golf every day, unless a storm goes through.

Vibrant RV communities can be found on the Atlantic side from Jacksonville to Daytona with state and private parks abounding. The area around St. Augustine is known as “the Historic Coast.” Daytona to Port Canaveral is the Space Coast

Across the northern peninsula to the Gulf side, you’ll find the “Forgotten Coast,”  with great among in places like Apalachicola and Caravelle. Travel north and west along the gulf side around the so-called “Florida Armpit” to where the panhandle begins you will find “the Emerald Coast,” a region of spectacular white sugar sand beaches and a distinctive emerald color to the Gulf of Mexico. This region stretches from Panama Beach on the eastern end to Pensacola just where the Florida peninsula turns south. State parks, RV resorts, and a string of beachfront communities offer lots of camping spots, great shopping, and restaurants.

Most people don’t think of Alabama as a snowbird destination. But that’s probably because they never visited Mobile, Gulf Shores, and Orange Beach. One of the nation’s finest luxury RV resorts, Bella Terra, is located on Alabama shores.

Alabama’s Gulf shoreline beaches are equal to anything you’ll find on the Florida Emerald Coast and these communities all have parks and Rv resorts that are very welcoming to snowbirds. Best of all, in the winter, this area is much less crowded than the Florida towns just to the east.

Moving west into Mississippi towns like Ocean Springs, Biloxi, Gulfport, and Gautier are little-known spots that are perfect for sun-seeking snowbirds. In early February, around Mardis Gras time, these communities are non-stop centers of fun and celebration with multiple parades held at all times of the day and evening.

Unlike their rowdy neighbor of New Orleans to the west, these Mardi Gras parades are family-friendly and much less raucous. In 2021, more than 20 are scheduled. The whole region gets involved and the event is now known as the “Carnival on the Coast.”

Southern Texas is rapidly becoming a major RV snowbird and winter visitor destination. It’s always been known as a great spot but with the RV boom of 2020 and 2021, the word is getting out that the southern part of the state has short-sleeve weather almost all winter long, Temperatures in the low to mid-70s are more common than not, even during the coldest of winters.

The climate is sub-tropical, complete with winter-blooming bougainvillea, exotic birds, and beach camping on what’s called the “Texas Riveria.” Oh yeah. Down here, they aren’t called snowbirds. They are known as “winter Texans.”

Except for the mountains in the north, New Mexico has what I consider as a very comfortable climate in the winter. Not quite balmy, but almost.

Alamogordo has an average daytime temperature of 70. You can snow ski up in the nearby mountains if it’s not too warm. It’s not far from the new White Sands National Park.

Las Cruces, about 65 miles west of Alamogordo, averages 65 degrees in the winter–perfect in my book. Add in crystal clear air and gorgeous night skies and you will want to stay for the whole season.

Other good snowbird destinations in New Mexico include Silver City–Billy the Kid’s favorite town; Truth or Consequences, in the southwest of the state; and Tucumcari, located on historic Route 66.

The warmest winter weather in Arizona is from Tucson in the south, up to Sedona.

Close to half a million snowbirds winter in Arizona, with most concentrated in the south from Tucson to Phoenix. And, of course, Quartzsite. Probably 100,000 RVers call the Bureau of Land Management property around Quartzsite home for at least a few weeks each winter, with most desert camping in January. There’s always a place to camp here, thanks to all that BLM land.

But our favorite area is about an hour’s drive south of Quartzsite in the Kofa National Wildlife Refuge, just east of Yuma. It’s desert boondocking but much less crowded than Quartzsite.

Want a little more civilization? Check out the campgrounds and Rv resorts around Lake Havasu, Parker, and Prescott.

For snowbirds, Southern California is the most popular. There, seasonal spots book up fast. It’s always nice in Southern California. But if you move away from the more popular areas and still stay south of Los Angeles and west towards Arizona, you will find delightful off-the-beaten-path mountain communities, meadows and pastures, and wonderful desert camping.

Try, for example, the area around Blythe, which is located on the California-Arizona border along the Colorado River. Winter temps here run between the high 50s and low 70s. There is no air pollution. And it seldom rains in the winter. The air here is so clear that it is not unusual to see Mt. San Jacinto near Palm Springs,130 miles to the West. Palm Desert is another great California snowbird destination known for short sleeve winter weather and lots of lush golf courses.

And, further west, Twentynine Palms in San Bernardino County, named for the palm trees that surrounded the Oasis of Mara. This is where Joshua Tree National Park is located, on the edge of the Mojave Desert.

Want more ideas for where to Winter? Explore these unbelievable golf course campgrounds.

Do you have a secret snowbird destination you flock to? Tell us in the comments below.

Ask an RV Pro: 10 Camping Tips That Will Transform Your Travels 327927

Unique Ways to Make Your RV Feel More Like Home 297027