Bunkhouse fifth-wheel RVs can be some of the best models for families. When you camp with kids and other family members you need plenty of places for people to sleep and bunkhouses are the way to go. Fifth-wheels are also great because they offer stability when towing and the ability to leave your camper behind while you go off in your truck to explore other closeby areas or hit a restaurant or store while camping.

You don’t have to go out and but a brand new model to get a good one. There are plenty of used fifth-wheel RV models out there that are in excellent condition at a fraction of the price you’ll find a new one for. With that in mind, here are some of the models I’d suggest you look into if you want a used fifth-wheel bunkhouse.

The Keystone Hideout 308BHDS is one the more versatile bunkhouse floorplans out there. It features a large master bedroom at the front of the unit with its own half bath, an open living and kitchen area with a full bath just off to the side, and a large rear bunk room with a bunk bed on the camp side of the RV and sofa with a bunk above it in a slide-out on the other side. The unit features two slide-outs in total and the other is in the main living area and houses the U-shaped dinette and a tri-fold sleeper sofa.

For an RV that measures only 35 and a half feet, the Hideout 308BHDS offers quite a lot in terms of space and features. The model weighs only 9,025 pounds, too meaning it should be easy to tow behind a heavy-duty pickup and can be handled by some of the more robust full-size trucks, too. It sleeps up to nine people so you can bring along the whole family and maybe even some friends on your next adventure.

Check Out Our Used Inventory

The Heartland Prowler P326 is another model that features a similar versatile layout to the Keystone Hideout floorplan shown above. There’s a similar bunkroom at the rear with a slide-out that houses bunk beds, another slide out in the kitchen and living area that has a U-shaped dinette and a sofa in it, and there are one and a half bathrooms in this unit, with the half-bath connected to the large master bedroom. The materials and overall look of this unit differ from the Keystone model and is another take on this smart design.

The Prowler P326 measures a little longer than the Keystone at nearly 37 feet in length. The model also weighs a bit more at 9,612 pounds. Despite these two things, it should be easy to tow this model with a heavy-duty pickup and even some of the top-level full-size trucks if they are properly equipped. This model sleeps up to seven people so it’s sleeping capacity isn’t quite on par with the Keystone, but it’s still very good.

Check Out Our Used Inventory

The Forest River Blue Ridge 3720BH is a four slide-out model that offers a dramatically different layout than the two shown above. Despite this, it’s still one of the best bunkhouses out there you can find used. At the rear of the unit is a large bunk room with two slide outs for beds. The kitchen and living area also features a slide-out with theater seating and a free-standing dinette in it. There is a full-size bathroom separating the master bedroom from the main living area and another half bath near the bunk room. The master bedroom also features its own slide-out for either a queen or king-size bed.

Make no mistake, the Blue Ridge 3720BH is a large fifth-wheel, measuring about 42 and a half feet in length and weighing 14,016 pounds. But with that length and weight comes plenty of space. When you’re camping with family, especially for long periods of time, having a bit more space can be very beneficial. This model sleeps only six people but it does so in the utmost of comfort.

Check out our Inventory

These are the only used bunk models on sale. Check out all of the used fifth-wheel bunkhouses at Camping World! 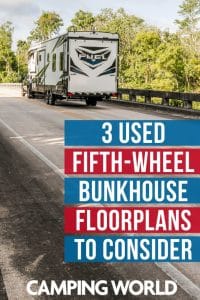 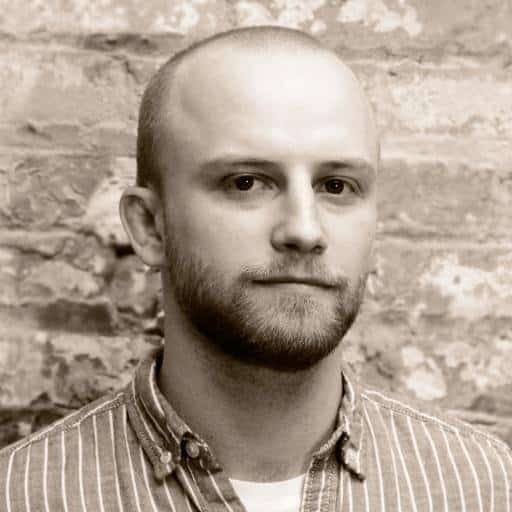