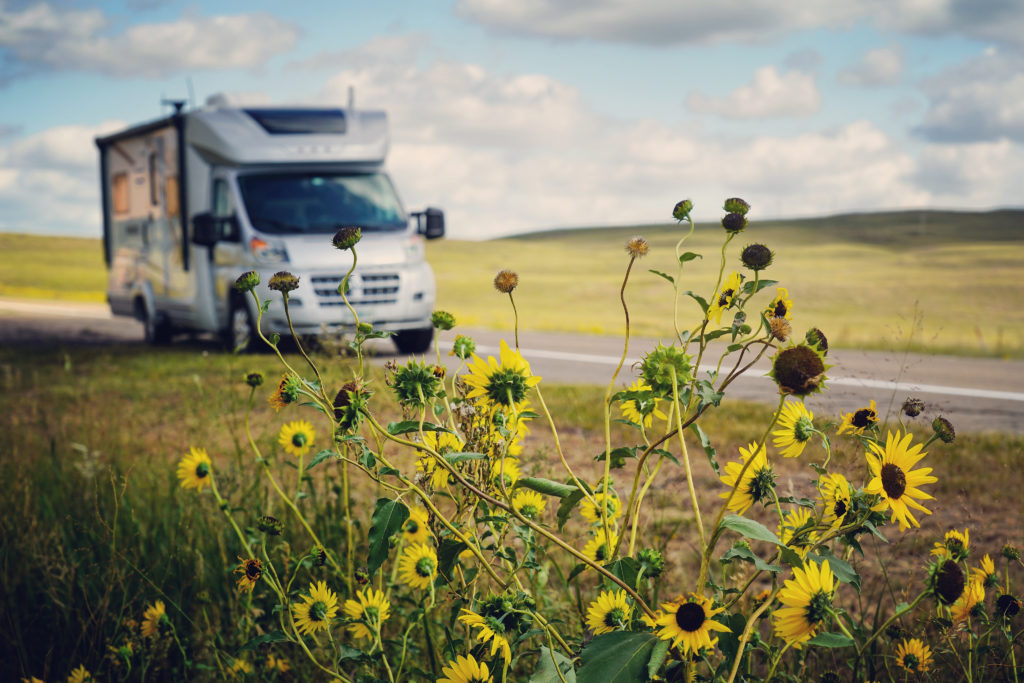 RVers love nature and when nature is in its most beautiful attire, it’s covered with wildflowers. Fall colors and leaf changes are equally as beautiful, and fleeting. To catch a glimpse of nature’s show, you’ll want the flexibility to hop in an RV and go.

It’s the nature of wildflowers to grow up fast and fade away, maybe lasting a month or two at most. If you want to see them year-round, you’re going to have to rely on planning and timing things just right. Don’t worry, it can be done!

What is a Wildflower

The proper definition of a wildflower is a flower that was not planted, that grows naturally in the wild. But I’m not going to be a stickler here. In some locations — think Texas and its famous Bluebonnets — wildflower seeds have been collected and intentionally planted in gardens and along highways and wayfares. Wildflowers, because they grow in the wild with basically no tending, they are hearty flowers and when you catch them in bloom, it’s like an explosion of color. No matter what variety you see.

Obviously, in most places, the peak time for flowers is in spring. But spring comes at different times in different parts of the country. Here’s where that timing thing comes in.

Wildflowers in the South

In Florida and the southern states, wildflowers start popping out in early spring – think late February or March – and last until late fall, around Thanksgiving. A drive through the Blue Ridge Mountains at the right time will show off southern wild blooms.

Wildflower in the North

In the north, they may not start showing up until late May or even early June. They may last in different waves for different species, until the first frosts of fall. Generally, they start to fade and wilt a bit in the full heat and humidity of summer. There’s plenty of time to view wildflowers during peak camping season. Plan your first RV trip of the season around camping near a bloom.

Wildflowers in the West

The “super blooms” of California are legendary. Entire hillsides turn a rainbow of colors for a brief period as a result of dormant wildflower seeds in western desert soil. This usually happens if there has been a rainy, wet spring season. A lot of environmental conditions must align for a super bloom to occur, which makes this natural phenomenon worth traveling for. People flock to California from all over the country to view the super bloom and take photos against a blanket of color. When viewing super blooms, or any other wildflower bloom, follow local laws and guidelines about staying on designated walking paths. Trampling the wildflowers could damage a fragile ecosystem.

How to Plan an RV Route to See Wildflowers

But contrary to what many think, wildflowers bloom pretty much all year round as long as it’s not too cold. So if you want to see wildflowers year-round, you’ll want to set up a route. Fortunately, that route pretty much follows what just happens to be the favorite travel migration of many full-time RVers.

Let’s go over a few tips for finding beauty and blooms along your travels.

Try to Stay in 70 Degree Weather as Much as Possible

For most people, temperatures around 70-75 degrees are the most comfortable. The same is true for many of the most colorful wildflowers. If you start in the south in early spring and slowly make your way north to the I-10 corridor in Northern Florida and then head west, you can count on finding wildflowers all along the way.

When the weather starts hitting the 80’s and above, somewhere in Texas come late March or early April, make your way into New Mexico and use altitude to make a slight turn to the northwest, keeping those temps in the 70’s as you slowly make your way into the mountains of northern New Mexico, and on into most any place north and west you want to go in Colorado, Utah, Wyoming, and Montana.

Explore the west from May to September, Visit the National Parks, get out of the most stifling heat and keep climbing through the Rockies and beyond. Wildflowers will line your path. When the weather starts to get cold, start coming down from the mountains and pick a northern route back east like I-94  Stop and explore the Dakotas – North and South.

Meander through Minnesota on into Wisconsin following, say, US-2, into Michigan’s Upper Peninsula until the growing chills turn the Sumac brown. Come down through the Michigan Lower Peninsula and head east through Ontario, paralleling Lakes Erie and Ontario. Get to New York and the Adirondacks as fall colors peak and the northern wildflowers shrivel in the first frosts.

Then skedaddle back south watching the Geese migrate above and the fall wildflowers below until you get to someplace in Florida where the 70’s are a pretty much daily average all winter long (generally, south of a line from Sarasota on the Gulf to Port St Lucie) along the Atlantic Coast. Wildflowers will revive when the summer temps begin to drop. In the coldest months, head to the Everglades and the keys. Wildflowers bloom there pretty much all year.

Where to Find the Best Wildflower Displays

Here are some specific wildflower blooms to look for.

Get a Wildflower Identification App

We use an app to help us identify the wildflowers we encounter; there are a bunch to choose from. The one Jennifer and I use is called Picture This. Simply take a photo and it then identifies the flower or plant and tells you all about it. Knowing what you see makes it even more special.

As you plan your wildflower chasing RV trip, search for discounted campsites and gas along the way with the help of a Good Sam membership.

Happy Trails. And be sure to smell the flowers!

Mike Wendland is a veteran journalist who, with his wife, Jennifer, travels North America in a small motorhome, reporting about the people, places, joys, and adventure of RV life on the road at RVLifestyle.com. He and Jennifer also host the weekly RV Podcast and do twice-weekly videos on the YouTube RV Lifestyle Channel. They have written 21 books on RV travel.