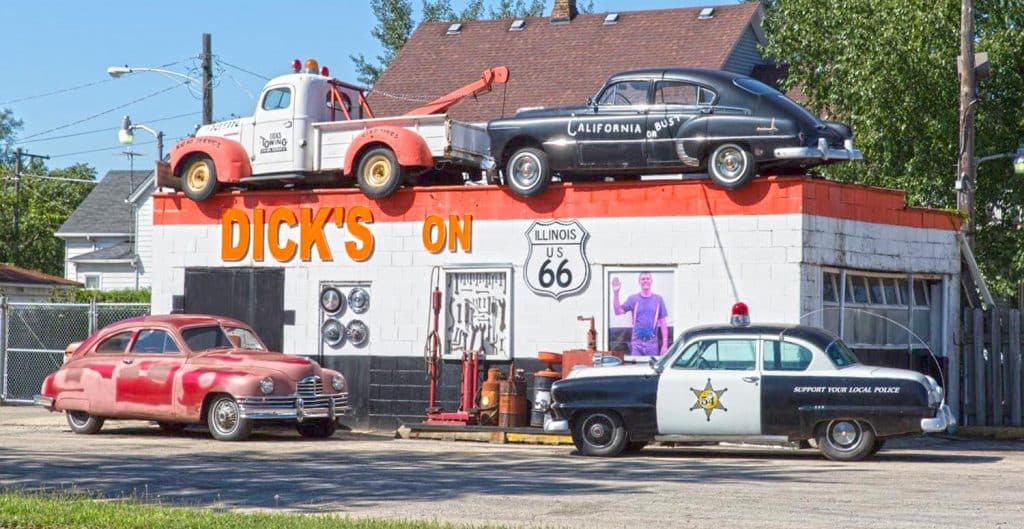 Route 66, the iconic “Mother Road,” winds its way from Chicago, Illinois to Santa Monica, California.  If you don’t have the time to drive the entire route, why not take on this icon of American transportation history in bite-sized pieces?  We’re going to help you do just that with a series called Get Your Pics on Route 66 in hopes that you’ll capture some great memories and images as you explore this little slice of Americana.  Here’s the Route 66 Northern Illinois installment:

Route 66 runs about 300 miles across Illinois from Chicago to East St. Louis and was formerly a Native American Indian trail and stagecoach road called the Pontiac Trail. When Cyrus Avery and John Woodruff introduced an inter-regional highway connecting Chicago and Los Angeles, The Route became the culmination of their dreams. It starts (or ends, depending on your direction of travel) in the Windy City, and because Illinois has so many remaining attractions from the highway, we’ll be covering the northern half of the state in this report.

Head downtown to the intersection of Jefferson and Jackson Streets.  You’ll find the “Begin” Route 66 sign one block over on Adams Street, as it is a one-way street. The “End” sign is at Jackson and Michigan Avenue, and Grant Park is considered the official terminus of Route 66.  Start your adventure down America’s Main Street from Grant Park.

At 565 W. Jackson, you’ll find the first restaurant on Route 66’s southern trek: Lou Mitchell’s. Built in 1949, the building still has its original neon signs, black, and white flooring and booths. They’re still offering great breakfasts and lunches, so find a table and grab some grub to fortify you on your Mother Road adventure. And if you kindly complain to the staff that you don’t like being discriminated against because you’re male, you may be given a box of Milk Duds.

This suburb of Chicago is home to Henry’s Drive-In, where hot dogs have ruled since the 1950s. Their motto is “It’s a meal in itself,” and today’s travelers along Route 66 must agree, as they are still serving ‘em up at Henry’s, and the original neon sign continues to brighten up Ogden Avenue.

Make your way out of downtown Chicago to Hinsdale, just 15 minutes away for another scrumptious diner that instructs travelers to “Get Your Chicks on Route 66.” Dell Rhea’s Chicken Basket started as a lunch counter in a gas station in the 1930s and grew into its current residence next door in 1946. When the interstate highway decimated businesses from The Mother Road, bypassing the Hinsdale community, this restaurant was saved by savvy marketing to Chicago suburbanites.

The next town on The Route today is Joliet—famous for their imposing prison and motor speedway. But you’ll find several kitschy attractions around town, including the Rich and Creamy Ice Cream Stand.

Built at the end of Route 66’s commission, the original “Creamy Delight” store was almost torn down, but the city of Joliet has found a way to keep serving the cold desserts to Route travelers today.

But if you’re a connoisseur of ice cream you won’t want to miss the site of the world’s first Dairy Queen store. Located at 501 N. Chicago in Joliet and opened in 1940, the shop was the first to deliver “soft serve” ice cream labeled as “the new frozen dairy product” by its creators, the McCullough family.

Be sure to stop in at the Route 66 Welcome Center at 204 W. Ottawa Street to learn about the history of Joliet and the importance of the famous highway to its economy and growth.

Another interesting sight along The Route is Dick’s Towing at 911 N. Broadway. Located in an old gas station, the towing business has created their own display of Route 66 vehicles in front of and on top of the building. Although the business was not in existence during the Mother Road’s heyday, they have found a quirky way to attract today’s travelers.

Don’t forget to visit the Gemini Giant at the Launching Pad Drive-In. He is one of the original “Muffler Man” creations, paying homage to the Gemini Space Program by holding a rocket in his hands. You can’t miss him, as he is dressed from head to foot in green and wearing a homemade space helmet!

Following Interstate 55 (old Route 66) south to Dwight, you’ll find a wonderful restoration at Ambler’s Texaco Gas Station. Originally built in 1933 in the cottage style so popular along The Route, this station has been restored to its former glory today and serves as an information center for the town of Dwight, as well.

There is also a nice signboard display of Route 66 attractions in the area as you enter the village.

For another great preserved service station, just travel a few miles south to Odell, Illinois. Here the Standard Oil Gas Station has been returned to its “domestic style” architecture, described as a house with a canopy that gave customers a feeling of trust. The building was erected in 1932 and a few years later, as traffic continued to increase along Route 66, the contractor added service bays. Today it stands as a reminder of the influence the highway had on this and other small towns, and it also houses the community’s visitor center.

Continue on Through the Prairie State

The very first section of Route 66 is now in your rearview mirror, and you won’t want to miss the second half of the highlights in Illinois. So please join us next time for more Mother Road nostalgia in the Southern Illinois section of “Get Your Pics on Route 66.” In the meantime, why not find your own adventure along the Mother Road in a motorhome or travel trailer from Camping World?

You can drive the rest of Route 66 with our other “Get Your Pics on Route 66” articles. Read the entire series.

Ask an RV Pro: 10 Camping Tips That Will Transform Your Travels 330476