The first thing you should know about this story is that we were complete newbies. And by complete newbies I mean this was literally our first time traveling in the RV. Sure, we had lived in an RV for almost a year and a half, but we had never moved an RV before.

That would be my husband and me. He’s Ed. I’m Liz. We live full-time in a 2007 Jayco Greyhawk with our three-year-old daughter and dog. My husband ended his military service a few months ago around Christmas time. Naturally, we thought it would be great to go home to Connecticut for the holidays in our motorhome.

So we packed everything up, bought a tow dolly from a friend, and hit the road.

It’s safe to say at this point, we thought we were pretty cool.

The Good and Bad of RVing in the Snow

We didn’t make it very far that day. In eight hours, we covered about 200 miles. (Remember, we’re newbies and have a toddler.)

At about 8 p.m., I knew we were coming up to a Camping World that allowed overnight parking and I was ready to call it quits. I told Ed it was cold and most people weren’t going without hookups that night. I figured we had great odds to find a spot to park that night in the lot.

We got there and I was right! Not another rig in sight. What a relief! I was grateful the cold weather meant people had driven south.

And kept reminding myself that every time I woke up cold.

All the Way Up the Atlantic Coast

Every Camping World we hit for an overnight stay, there was no one else in sight. We were very lucky to have hookups all the way to Connecticut.

While camping in Pennsylvania, we were close to a gas station. We woke up early in the morning and I decided to walk to the station for milk and eggs. I not only grossly underestimated the length of the walk, but the amount of snow on the ground.

By the time I got back to the RV, my pants were frozen from the knee down!

A little tip for those RVing in the snow when they’re from the south: don’t walk to the gas station. You might think it’s no big deal, but it is in fact a big deal.

Other Things That are a Big Deal in the Snow

We were almost to Connecticut when my husband started having trouble with the tow dolly.

We were parked at a gas station. When I came out of the store, I noticed him outside looking very frantic. He told me when he made the sharp turn in, the tires had almost come out of the straps.

This sent me into full-on panic mode. Mostly because I am completely ignorant to towing, straps, and tools. I had no clue how that had happened nor did I know how to fix it.

Ed had to unhook the entire vehicle to get the tow system right again. This wouldn’t have been a big deal except we were in New York. With the snow. And the sleet. And all manner of cold wetness on the ground.

By the time Ed was done unhooking and hooking up the car, he looked like a dirty slushie.

A little tip for those using a dolly for towing: ensure proper size of straps before hitting the road.

Just When We Thought it was Safe

After four long travel days, we finally made it to Connecticut for the holidays.

We parked at my father-in-law’s house and rushed inside to get out from the cold. (After unhooking the car in the sleet once more, that is.) It felt so good to be parked for a few weeks and with our family.

That’s when it hit me.

“Ed, you remember that story in my book about the guy that goes to Connecticut for the holidays and forgets to drain his hot water heater? Ya know, and floods the whole RV? Did we drain the hot water heater? We really should…and winterize the rig, too.”

He told me he remembered and would drain the tank after dinner. He’d have to go to the store to buy some antifreeze, but it would have to wait until morning.

That’s when I started sweating for the first time in four days.

It Froze That Night

And Ed didn’t drain the tank.

Instead of freaking out, I told him not to stress. There wasn’t anything I could do about it, but we still needed to go out and get some RV antifreeze.

Long story short, we bought the antifreeze, left it on the porch for an hour, and came back to it frozen.

I spent the rest of the trip worrying about all our pipes bursting and the mega flood of water that was inevitably going to flow through my RV once things thawed out. I love my little motorhome and thinking of it going down like the Titanic was very stressful!

Ready for another little tip? Save yourself the headache. Drain your tanks and pipes if you’re in cold weather.

That’s how the saying goes, anyway.

After three weeks of snow storms, we finally headed back to warmer weather. And of course, the second it was above freezing, the water in our tank began to thaw and caused a miniature monsoon in the rig.

Lucky for us, we were anticipating this and cleaned it up quickly. Unlucky for the heater tank, it was completely blown out. It looked like someone had shot it with a rifle.

We learned a lot that first trip into the snow. Mostly that we don’t like traveling in the snow.

For those that do want to venture into the snow with their RV, here are a few last tips: 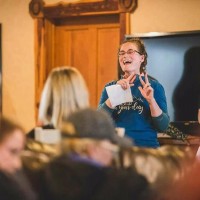 Liz Wilcox Contributor
Author of Tales From the Black Tank, Liz Wilcox is an Army wife turned RV entrepreneur. When she’s not out exploring the US with her family, you can find her telling jokes and swapping campfire stories. She is a firm believer in the power of the campfire and refuses to settle for suburban survival. At the end of 2017, she gave up personal space in return for personal freedom, hitting the road in a 2007 Jayco Greyhawk. As a full-time RVer, she has a passion for creating community among campers of all kinds through humor and storytelling. You can learn more and become part of her community at The Virtual Campground.