Imagine relaxing on immaculate white sand beaches, snorkeling through protected coral reefs and meandering through hundreds of years of history all in one place. Here visitors can explore the same coves where pirates hid their bounty and Christopher Columbus greeted Native Americans in 1493.

Relish the sounds of the Caribbean surf lapping the sand or hike through tropical forests to discover the magnetic pull of island life. 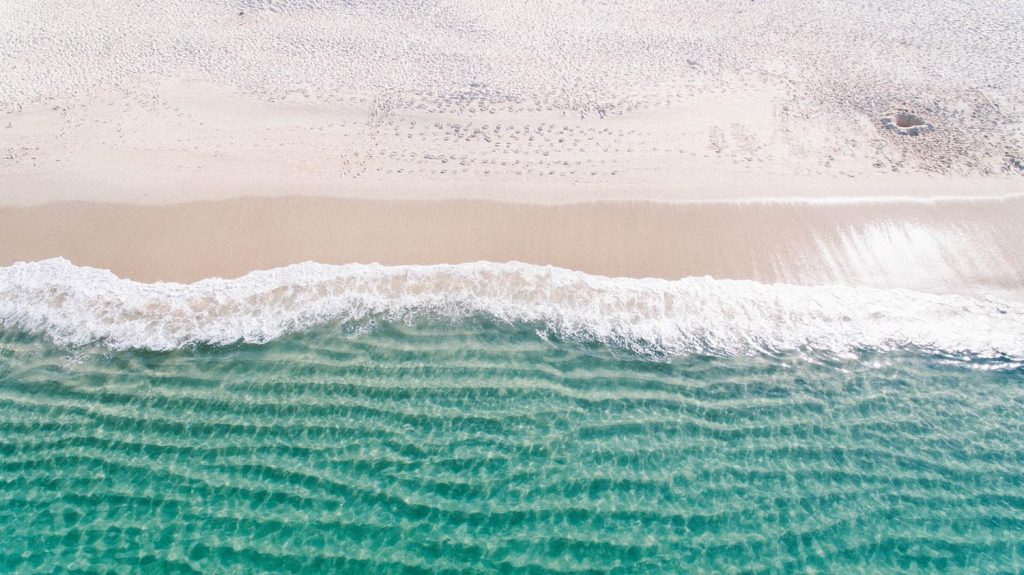 The first residents of the Virgin Islands were hunter-gathers from South America. They date back to 840 BC, but within 1,600 years villages had been established in almost all the beaches on St. John. By the time Christopher Columbus arrived here in 1493 Taino Indians had settled on the island, and with Columbus came Europeans, who began battling over ownership of the islands.

Merely 100 years later, pirates discovered the seclusion and safety of this region, using it to hide out as they plundered treasure from Spanish ships. Blackbeard himself sailed this waters, using the hidden ports to lie in wait for unsuspecting ships carrying expensive cargo.

Members of the Danish West India and Guinea Company were the first to settle on the Island of St. John in the 1700s, establishing sugar cane plantations, which required large numbers of laborers. The planters initially used the indigenous tribes as slave labor, then began importing Africans from the Portuguese-dominated slave trade.

It didn’t take long for the number of slaves to become five times greater than the number of Danish settlers and a serious uprising occurred, putting the control of the island in slave hands for nearly six months. However, rather than return to captivity and slavery, more than two dozen Africans took their own lives before French forces could get to them. 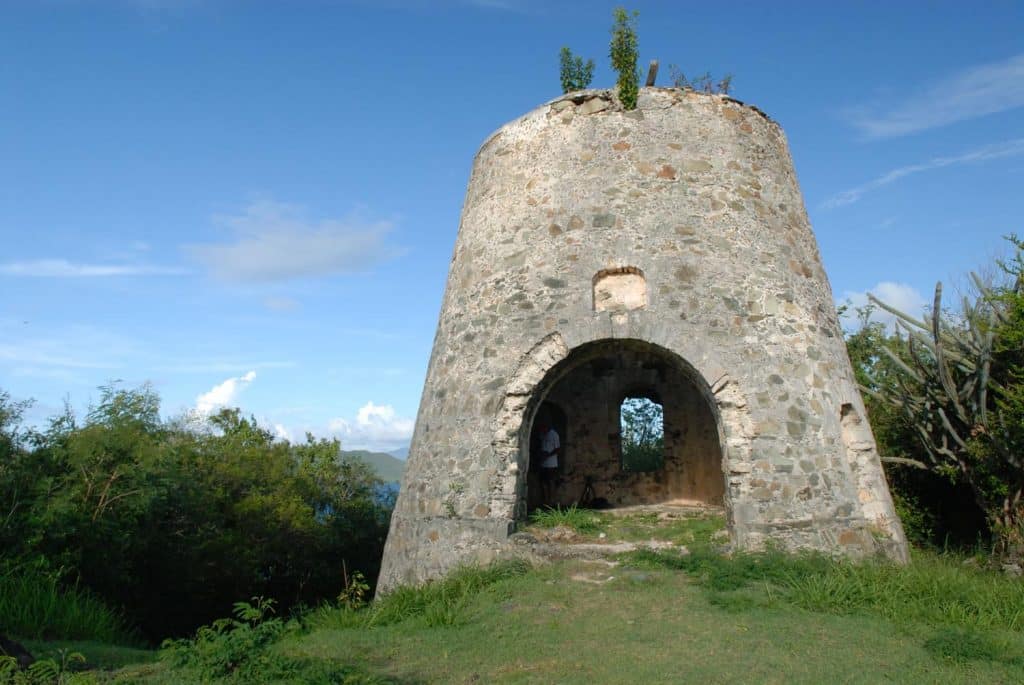 Finally ending the practice of slavery in 1848, the sugar cane plantations soon reaped what they had sewn.  They began to fail, as they had been dependent upon the free labor.

In need of a naval base during the first World War, the United States purchased the Virgin Islands from Denmark in 1917. Wealthy investors began buying land and rehabilitating many of the plantation houses, creating resorts. Laurence Rockefeller owned a large swath of St. John and in 1956 deeded the property over to the National Park Service, with the agreement it would be protected from further development.

Why Can’t You Visit Virgin Islands National Park in Your RV?

The park is on an island that requires first a plane ride and then a boat ride to get there. So, RV to Miami, find a place to park it for a while and enjoy a quick holiday in a resort or at the campground on the island (with tents and linens included).

Your motorhome will be waiting for you when you get back from a relaxing getaway at Virgin Islands National Park.

Here is a list of the places you need to check out when you visit the island.

This is the longest beach on the island, perfect for sailing and windsurfing, and snorkeling gear is available for rent here, as well.

This beach even comes with its own lifeguards, so enjoy swimming and snorkeling in the sun and surf.

Located in Cruz Bay, the visitor center provides brochures, maps, and information about the park, as well as schedules for ranger-led tours and hikes. 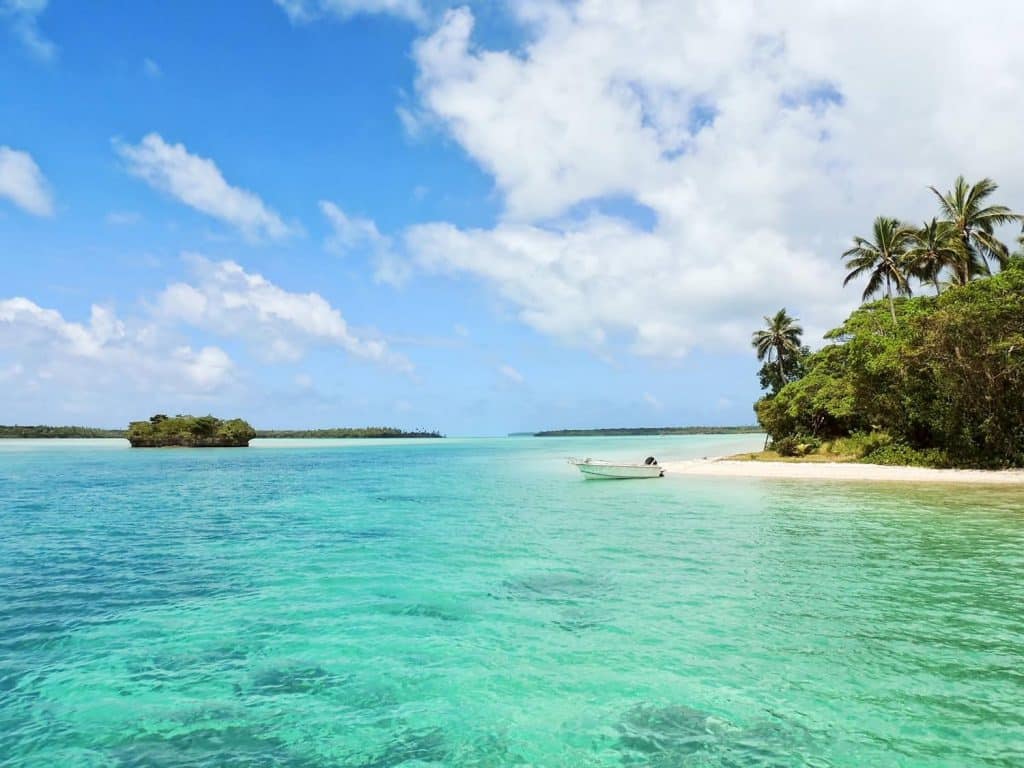 Here are some of the activities you can and should do while enjoying your stay at the park.

There are several hikes on both the North and South Shores of the island, varying in length from 15 minutes to two hours. Here are a few of the 20 trails through the park: 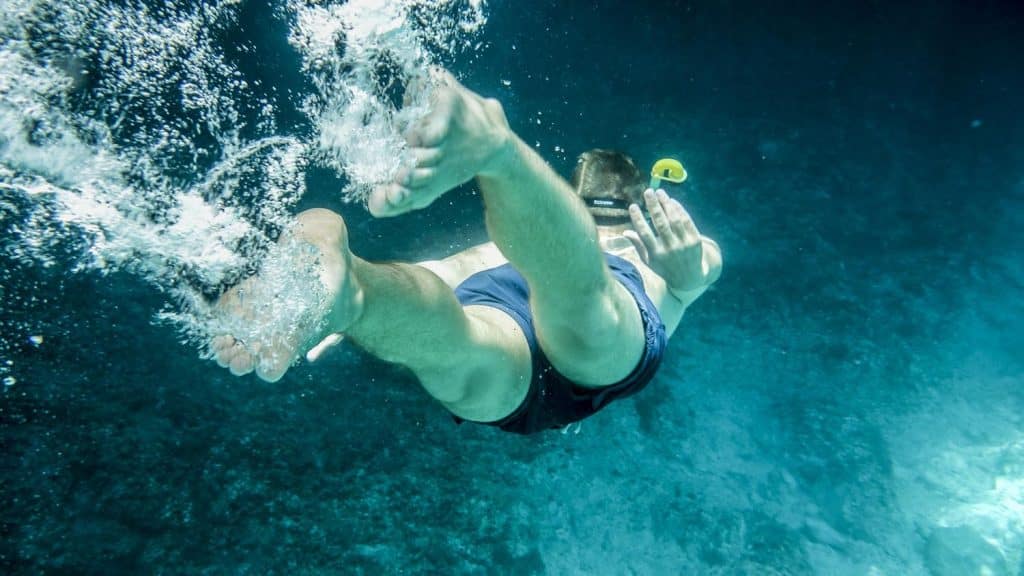 There are several locations that have exquisite snorkeling and SCUBA diving opportunities, including the beaches within the park.

Cinnamon Bay has perfect conditions and just the right amount of wind for these water sports, and they offer rentals.

It is limited by location and types of fish. Here is the Virgin Islands Fishing Handbook

Cinnamon Bay Resort has a campground that includes bare sites for those with their own tents, and platform tents, which come with tent, camp mattresses and linens.  There are also several cottages that can be rented.

The forests on St. Johns Island have a wide diversity of birds, including hummingbirds, cuckoos and warblers.

The simple pleasure of a walk along the beach collecting shells or building a sandcastle is easy to do here, with so many quiet beaches to choose from. 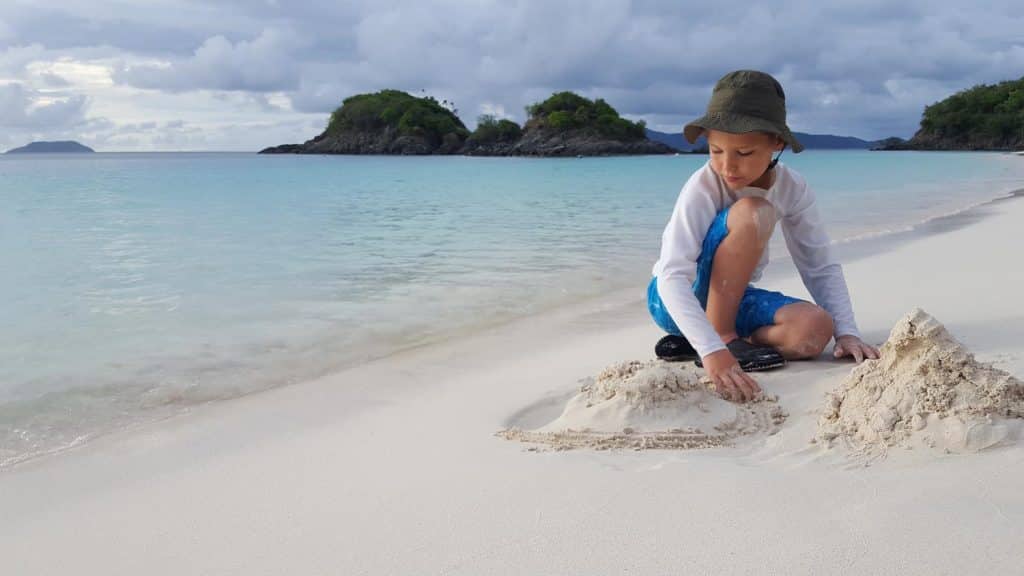 When is there a bad time to visit a Caribbean island? Many travelers love to visit in the winter, substituting sunny warm beaches for the cold and snow of the northern states, so December through March is usually the busy season for Virgin Islands National Park.

The park is open year-round, and as long as there is water for cooling off, even summers are a delightful time to enjoy sunsets on the beach and snorkeling among the coral reefs.

One caveat—watch the weather reports if planning a trip to the island between August and October, as that is prime hurricane season.

Where You Can Stay 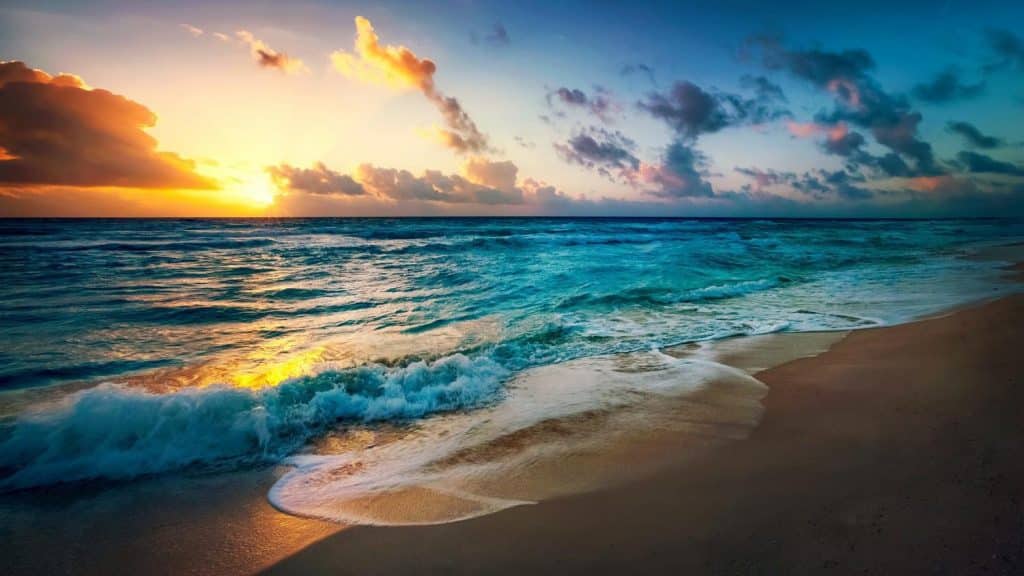 Obviously, there are no RV campgrounds or dispersed sites on St. John’s Island. Since arrival to the island requires an airplane flight, travelers are reminded to leave their motorhome or travel trailer on the mainland.

However, camping by tent is allowed on the island at the Cinnamon Bay Resort, and cottage rentals are available there, as well. If looking for an RV campground on the mainland to utilize before and after your trip to St. John, here are a few suggestions in the Miami area:

Getting to and Around Virgin Islands National Park

Getting to Virgin Islands National Park is a three-part process. Visitors must fly into St. Thomas, as the Island of St. John has no airports. Once landed, rent a car or take a taxi to the east end of St. Thomas Island and the town of Redhook. Take a car barge or people ferry to St. John’s Island. From the ferry terminal, it is a short walk to the National Park visitor center.

There are two roads on St. John and both are best traversed by car, as they are steep and winding. Vehicles are required to stay within parking areas and will be ticketed if parked outside of designated regions or on fragile vegetation. 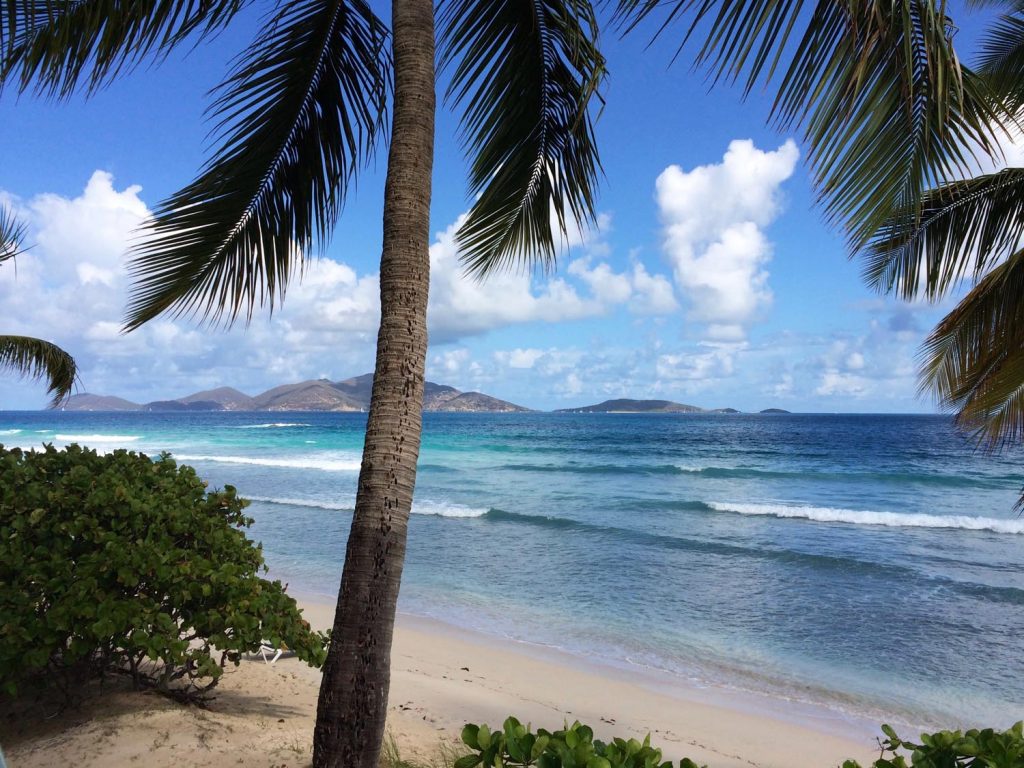 A visit to Virgin Islands National Park is more like a getaway, where travelers immerse themselves in the sights and sounds of the Caribbean while absorbing the tumultuous history and wonderful mixture of cultures and inhabitants that exist there today.

It is a place for exploration, relaxation, and anticipation of what tomorrow will bring to this island oasis. Visitors are guaranteed to leave with an overwhelming desire to return time and time again.

Do you want to visit the U.S. Virgin Islands National Park? Why or why not? Leave a comment below! 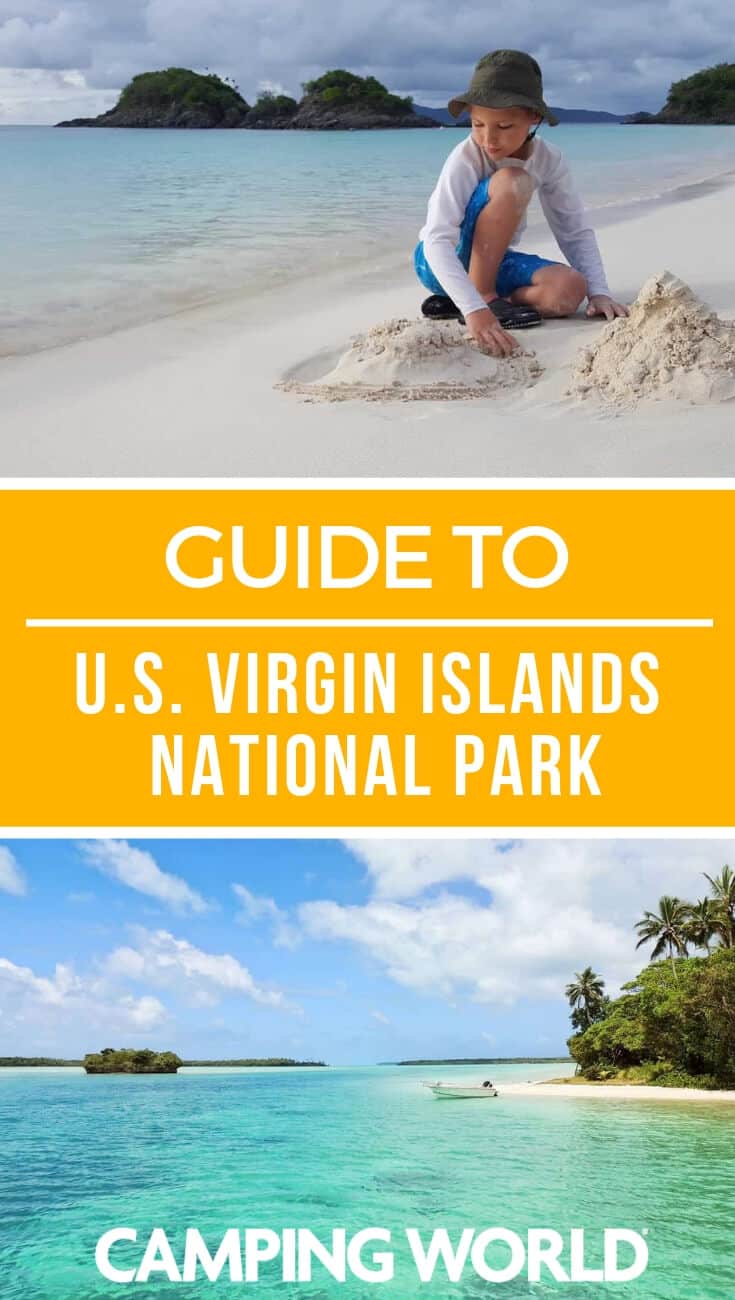