Known as the “Valley of the Vapors” to Hernando de Soto when he arrived in 1541, Hot Springs National Park lies in a small valley of the Ouachita Mountains in west central Arkansas. With 43 natural springs erupting from the rock, the region is highly sought after for its healing waters, and visitors today can stroll through historic bathhouses that harken to times past.

Enjoy a soak and steam. Residents have for over 100 years or have a brewsky at another of the converted bathhouses. Venture along the 26 miles of trails over Hot Springs Mountain and participate in several informative park ranger tours. Located within a city, this is an unusual national park, but one that celebrates our natural resources while protecting them.

Indigenous peoples have indulged in the hot springs here for thousands of years, but it wasn’t until President Jefferson sent an exploration party to study the flora and fauna of this region that Hot Springs got on the government’s radar.

They found Native American tribes like the Choctaw, Cherokee, and Caddo saw the benefit not only with the waters’ healing properties but with the temporary peace between tribes that was agreed upon when all were luxuriating in the hot springs.

Soon others arrived, improving upon the rustic tent structures that sprouted over the most prevalent springs. Cabins and huts soon became large buildings with troughs that brought water from Hot Springs Creek on the hillside to these “bathhouses.”

Eventually, a town grew around the hot springs, and as Arkansas became a territory, locals realized the need to protect this precious commodity. By 1832, Congress named Hot Springs Reservation as the first area designated for federal protection. Several springs were locked to protect them from pollution, and by 1880 it was opened for public use because a national park system had yet to be created.

A “free bathhouse” was built for the indigent in 1878, where testing was done and tickets issued to those who had ailments that might be helped by the thermal waters. The Army and Navy opened a dispensary for a couple of years, as well.

Once under federal government supervision, updates began to occur. Hot Springs Creek was covered with stone arches and a 100-foot-wide street was built above it, creating a promenade and alleviating problems with navigation through mud and water. Central plumbing was even put in.

The bathhouses were getting popular, with wooden tubs and steam cabinets installed. So, many people had heard of others recovering from illness in the waters that doctors even moved to town, creating bathing rituals and prescribed treatments for newly arriving patients. 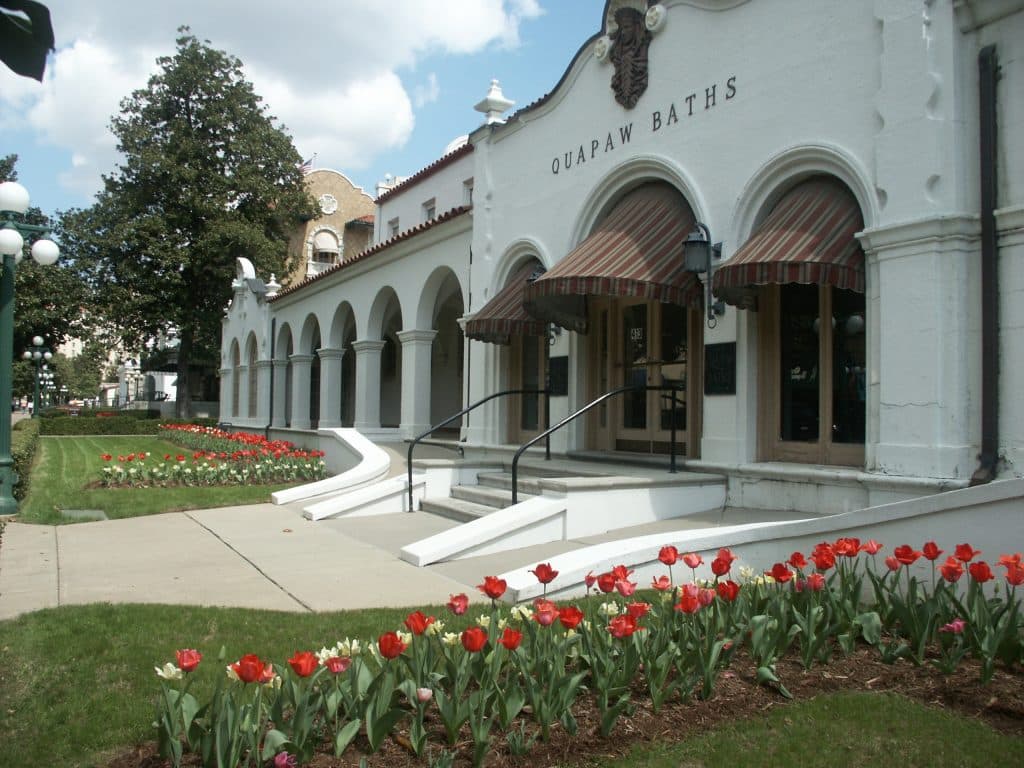 By 1921, Hot Springs Reservation finally became Hot Springs National Park, and the people continued to come. Even professional baseball players utilized the area as they called Hot Springs their spring training location in the early years.

Today the teams have moved on to Arizona and Florida for their off-season workouts, but visitors to the national park can still enjoy a bathing regimen in this historic district. 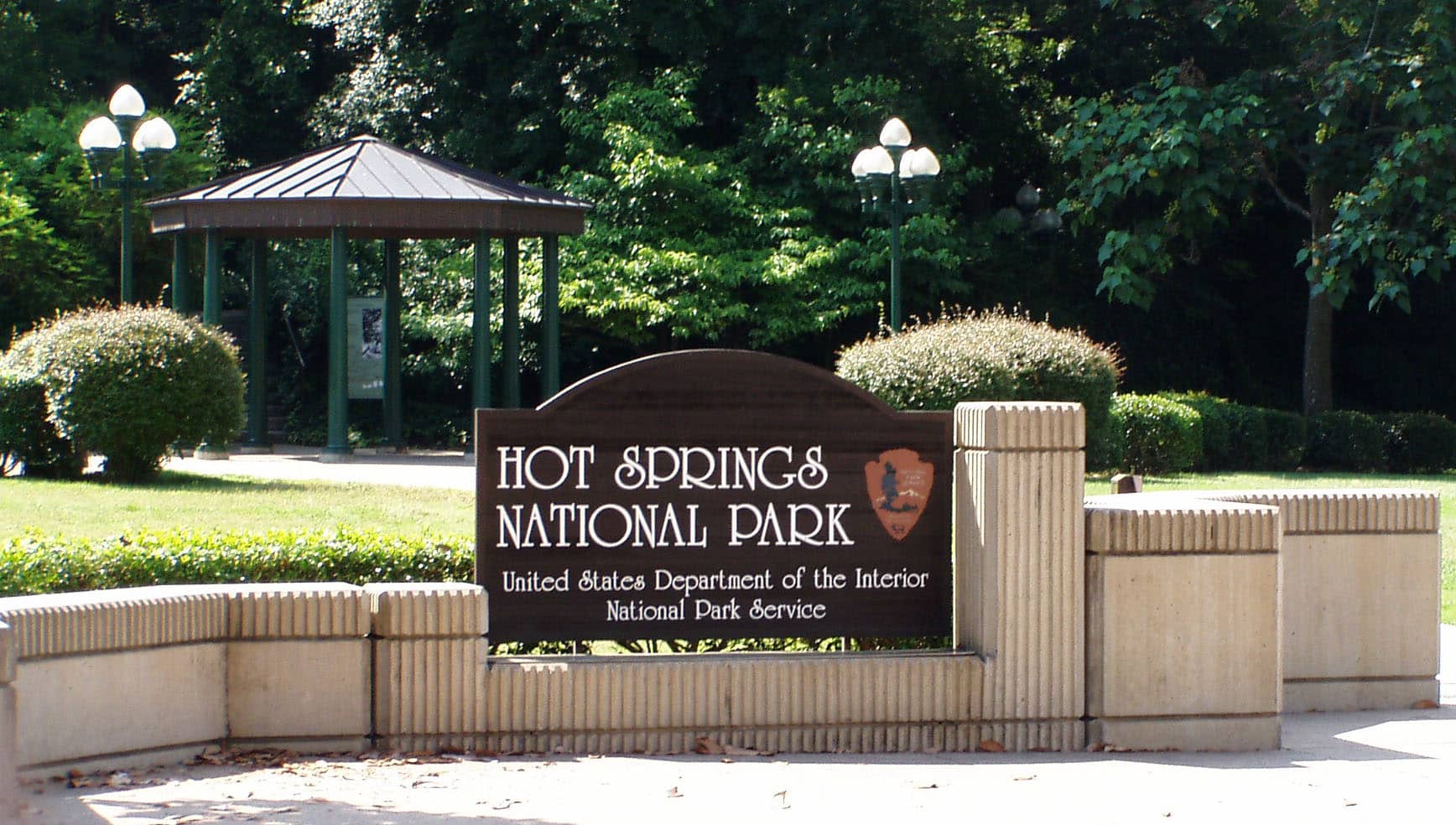 Very amenable to RVers and campers, Hot Springs has several nice campgrounds that cater to motorhomes and travel trailers. Tent campers can also find plenty of places to stay.

Imagine driving through the beautiful Ouachita Mountains to arrive at Hot Springs National Park, where you can enjoy the history of the area, and then participating in the bathhouse ritual of a tub bath, a sit in the vapor cabinet, application of hot packs, and relaxing in a cooling area, just as they did 100 years ago.

After this afternoon of pampering, you will definitely be ready for a nap in your RV, then a nice meal, either prepared at the campsite or taken at a restaurant in town. 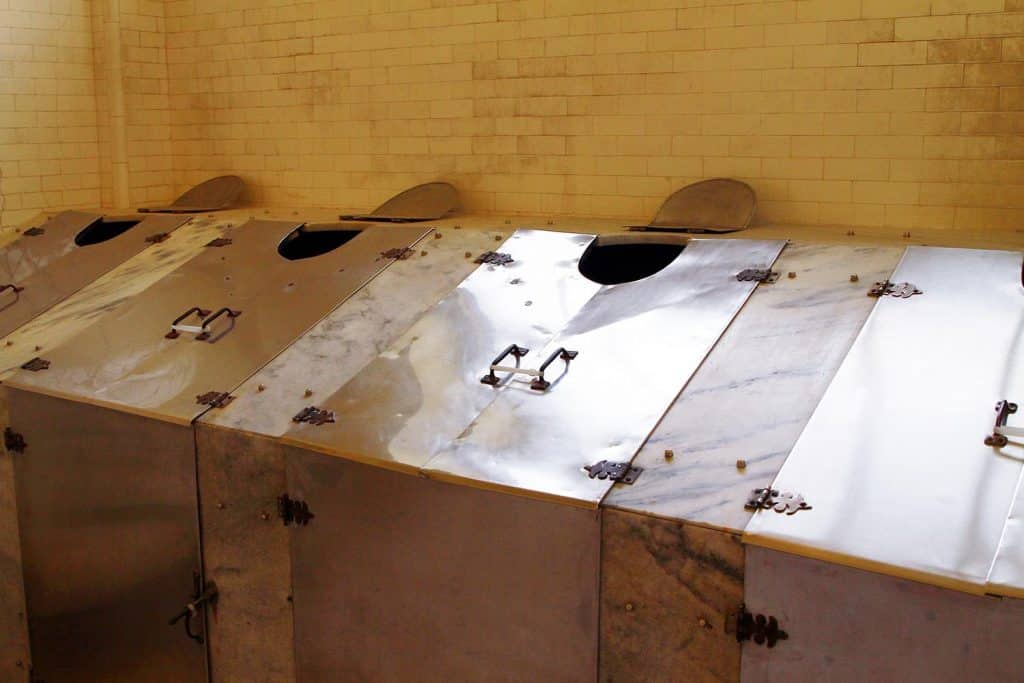 The park and the town of Hot Springs lend themselves to a relaxing getaway. Having your home on wheels with you will give you more time to embrace the slower pace of Victorian times that are still prevalent here. Even your RV will feel pampered by the time you leave this mountain hideaway!

There are plenty of places to visit at Hot Springs National Park. Here are some of the best places to stop. 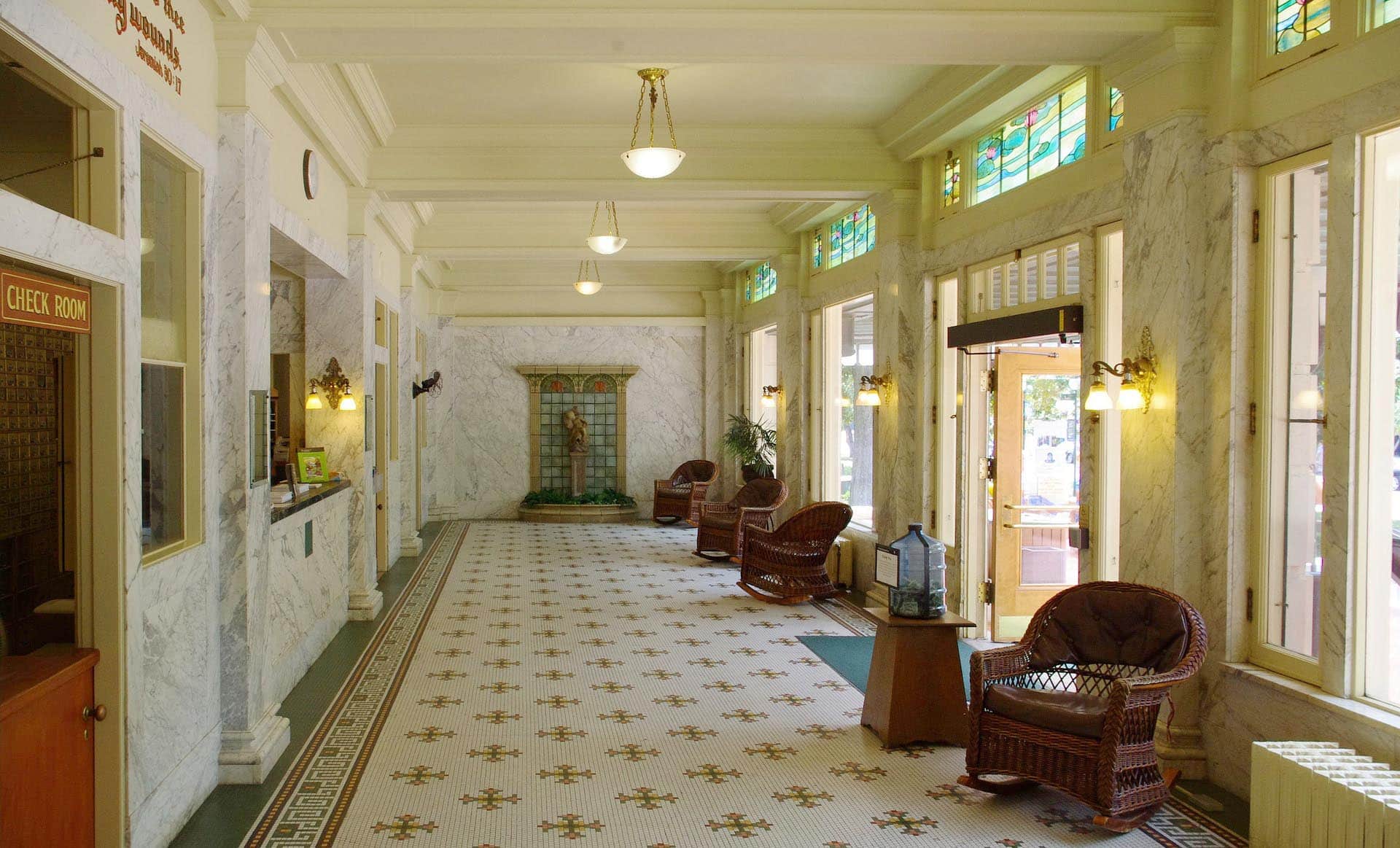 Started in the early 1800s as mere tents covering individual hot springs, these bathhouses later became ornately designed buildings, each with its own personality. Today these eight structures line one street with its own designation as a National Historic Landmark District within the park.

Located within the Ozark Bathhouse, this art gallery houses works from the Artist In Residence program and other exhibitions.

Part of the historic Fordyce-Ricks estate on Hot Springs Mountain, the creek and pond on the property were crossed several times by stone bridges.  Today the public area is known as Ricks Pond.

The first brewery located within a national park. Located in the Superior Bathhouse on Central Avenue, it has a colorful history as the “people’s bathhouse.” Now the hot thermal waters are used to brew beer.

Things to Do at Hot Springs National Park

Hot Springs National Park is full of things to do. You won’t get bored while you’re there. Here are some of the things you can do on park grounds.

As one of the smallest national parks, Hot Springs is easily accessible.  Visit each of the bathhouses on Bathhouse Row, and stroll down the Grand Promenade

With 26 miles of trails and paths, you can enjoy hiking the natural surroundings of Hot Springs Mountain. Here are a few of the trails available:

There are plenty of places to camp in and around the park. I’ve outlined all of the options below. It’s a wonderful place for RVers, but tent campers can find excellent campsites as well.

The park is open year-round, but peak visiting season is in summer. Keep in mind, however, that Hot Springs National Park is located within the Ouachita Mountains, so winter might be a little chilly. What better activity to warm you up than to bask in the historic hot springs?

Autumn brings a whole new dimension for hikers in the park, with beautiful Fall colors on the trees. That means there really isn’t a bad time to visit Hot Springs!

Where You Can Stay

Even though Hot Springs is small as national parks go, there is one campground within park boundaries. It’s called Gulpha Gorge Campground and has 44 campsites, all with full hookups.

There are also campgrounds nearby, including the Hot Springs National Park KOA, J&J RV Park and Storage, and Catherine’s Landing. These campgrounds also have tent camping sites. Many have cottage rentals as well.

Getting to and Around Hot Springs National Park

If traveling from Little Rock, take Interstate 30 to Exit 111, which is US 70. Continue west on US 70 to Spring Street in Hot Springs. Take a right turn on Spring, then right on Central Avenue. The National Park Visitor Center is located at 369 Central in the Fordyce Bathhouse.

Hot Springs National Park has made it easy on RVers when they arrive in town, as well, with RV and bus parking available one block south of the national park’s visitor center. There is also city transit if desired.

Bubbling to the Surface

The thermal waters of Hot Springs National Park are being enjoyed, while at the same time preserved in separate bathhouses and protected from pollution.

These natural resources astound us at their course of travel far underground, then re-emergence superheated here in the middle of Arkansas. They bring with them healing properties and bountiful hope, both in the past, present, and the future, because of Hot Springs National Park’s existence.

Have you ever been to Hot Springs National Park? Leave a comment below. 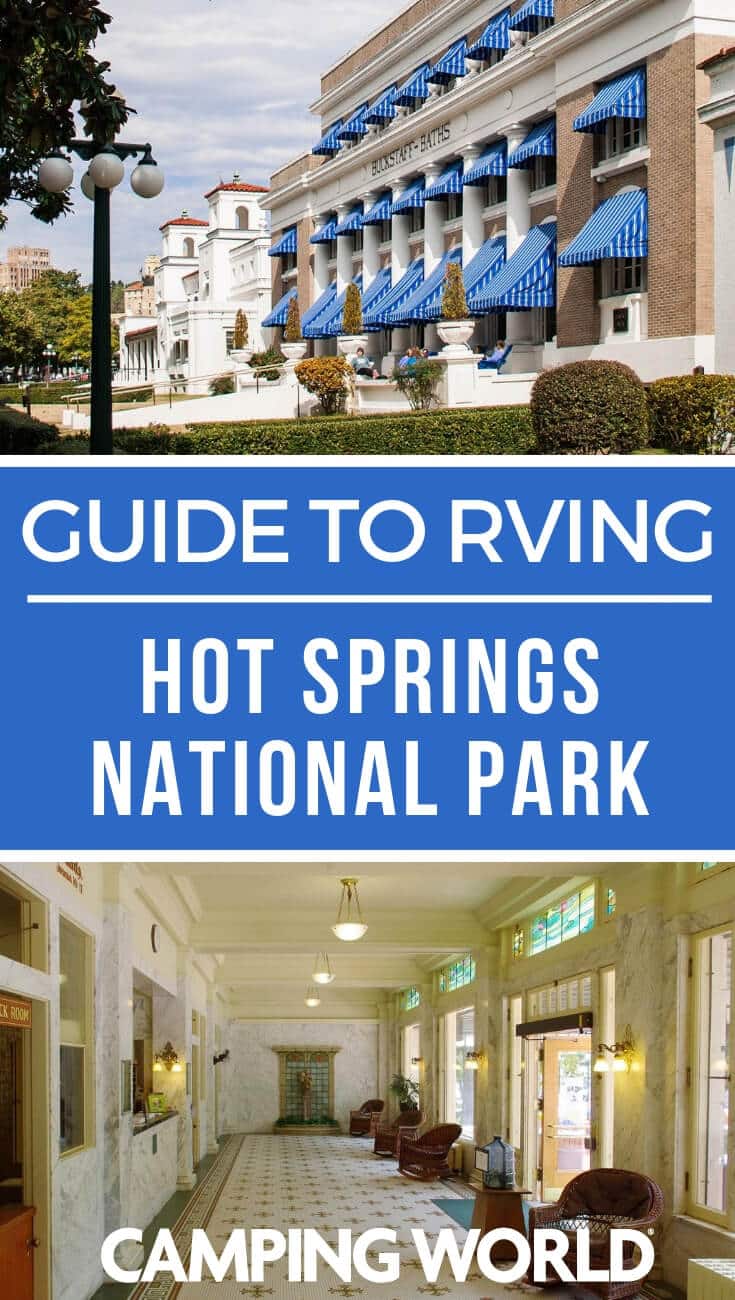