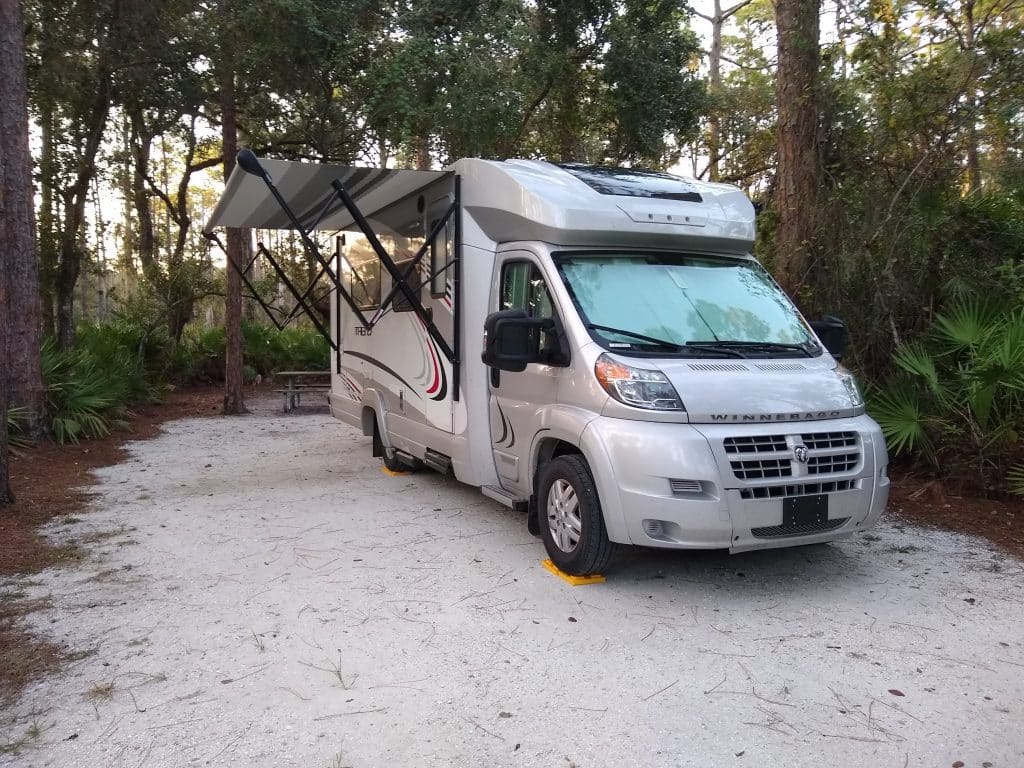 In light of this being the start of our 10th year of RV living, we thought we’d look back and share our 10 favorite campsites of all time.

Jennifer and I, with our Norwegian Elkhound, Bo, travel about half to ¾ of the time in any given year. Even in 2020, by being careful and following social distancing precautions, we still managed to visit much of the U.S.

We’ve been to some fabulous places. It was really hard to narrow the list to just 10, let alone rank them in any particular order. So we’re just going to list them. All are our favorites in their own special way.

Camping on the Oregon Trail Near Casper, WY

This RV Adventure had us riding by horseback and covered wagon right next to the still-visible wagon ruts made by the original Oregon Trail settlers from 1830-1840.

Our host was Morris Carter, who built wagons that replicate those used by the pioneers, Carter also actually made the 2,600-mile wagon train trip himself, from its start in Independence, Mo. to the final destination in Oregon’s Willamette Valley

After taking us on the trail, he let us go back and get our RV and spend the night in it next to where his wagon tour camped for the night. One of my favorite photos was of our RV next to the wagons and the Indian TeePees used for his guests.

Morris runs Morris Carter Historic Trails West. Travel the original ruts of the Oregon Trail. Authentic and beautiful. We camped with him near Casper, WY. It was an experience RVers and enthusiast should not miss. We arranged it through his website.

We love these wide-open badlands with their dramatic landscapes and the bison that wander throughout it, sometimes even through our campsites. We like hiking along the Little Missouri River and climbing the trails for scenic overlooks. No wonder it was the favorite getaway from it all place for President Theodore Roosevelt, whose love of conservation led to the formation of America’s National Parks.

Something also we like out here – the nearby town of Medora and the Medora Musical, an old-fashioned variety type music show set in a spectacular outdoor theater and held each night of the summer.

And we’ve never had a problem getting into the Cottonwood Campground in the Theodore Roosevelt National Park, even without reservations.

Mesa Verde National Park place is known for its well-preserved Native American cliff dwellings. There are more than 1,000 of them in structures built within caves and under outcroppings in cliffs. The ruins are the largest archaeological preserve in the United States, scattered across 81.4 square miles. The park was created in 1906 by President Theodore Roosevelt and there are lots of spots to see them and even crawl through them.The sandstone dwellings are in excellent condition and the U.S. Forest Service does a great job explaining everything.

This is a huge park. To get to the cliff dwellings, you drive 23 miles up a winding mountain road, climbing to about 8.500 feet from the 6500 at the campground level. There are several great hiking trails, too, for all levels.Sunsets are spectacular. And sunrises are peaceful in the clear, clean mountain air.

Boondocking on a Bombing Range – Camping at Eglin Air Force Base, Florida

Who says you can’t find Florida boondocking places? We found 14 spots to primitive camp at Eglin Air Force Base!

And what’s amazing about this is that these spots are in beautiful wilderness areas but just a few minutes away from some of the most popular tourist spots and beaches along the Emerald Coast of Florida’s panhandle, places where most RV parks are booked up as long as a year in advance.

Yet when we stayed at one of the Eglin primitive campgrounds not long ago – during prime spring break season no less – we were the only RVers there! And you can’t beat the cost, for Florida boondocking on the Eglin Air Force Base is just $5 per night.

The thing you need to know, though, is that the 14 different campgrounds scattered across the huge Eglin Air Force Base reservation are all surrounded by bombing ranges, places where the public is not allowed to go. In fact, to get permission to camp here, you need to take a video course on what to do if you come upon unexploded bombs, hand grenades, land mines, and the various other ordinances the Air Force uses for training and practice on the bombing range.

When you get permission to visit and camp there, you will get a color-coded map showing what areas are open and what is closed.

The Blue Ridge Parkway in Virginia boasts a treasure trove of scenic overlooks of the Appalachian Mountains, outdoor activities, and of course camping sites that make it worthy of the label “America’s Favorite Drive.” Spanning 469 miles from Shenandoah National Park to North Carolina’s Great Smoky Mountains National Park, there are over a dozen campsites to choose from off the Parkway. You can choose to spend anywhere from a couple of days to over a week exploring the wildlife or hiking some of the 1,000 miles of trails, 600 of which allow pets.

Further down the path but no less awe-inspiring in scope is Rocky Knob at Milepost 161.

While the RV hookup is nonelectric, you can camp near meadowlands, green pastures, and beautiful seasonal flowers. It’s the most secluded RV campgrounds in the Virginia Blue Ridge Mountains.

During the day visit the breathtaking Rock Castle Gorge stretching 3,500 acres. It’s one of the park’s premier geological attractions that historically was home to mountain families. Hike the 10.8 mile Rock Castle Gorge Trail and take in the rock crystalline quartz formations. Like the other sites, wildlife viewing and bird watching are plentiful. Unique to this location though – wine tasting! Then at night, enjoy a late-night s’more and stargaze at your RV spot’s picnic area. Just south of Rocky Knob at Milepost 176.1 is Mabry Mill, a former gristmill and sawmill that is now a community gathering place (not to mention the most photographed structure in the whole park).

When it comes to weather, scenery, and things for RVers to do, Arizona can’t be beaten. We love Quartzsite, but 45 miles or so south is an even more favorite location – the Kofa National Wildlife Refuge.

This is a vast wilderness, including the historical town of Yuma and Palm Canyon, and of course that abandoned mine museum in Castle Rock. Camping at the Kofa refuge is our favorite kind – boondocking. And you can camp just about anywhere in the desert here, free, for as long as 14 days. For those of you who prefer a developed campground, check out the nearby town of Yuma.

Our favorite spot at Kofa is about 10 miles down a dusty, washboard road. We boondock under the stars amongst cactus. A great tour is the mining museum, located in a ghost town that has been restored and stocked with artifacts found scattered in the nearby desert. Just follow the handmade signs on the side of the road for the  Castle Dome Mining Museum.

From there, we got a very interesting tour of one of the abandoned mines, where we saw a rock wall made of incandescent minerals that, under a black light, emitted colors unlike anything you’ve ever seen before. And the museum owner showed us numerous pair of old Levis and other jeans from the late 1890s that he claimed are worth many tens of thousands of dollars.

This is Florida beach camping at its best. Gamble Rogers Recreation Area is on an area of the North Atlantic Coast known as the Historic Coast and it has absolutely spectacular beachfront sites just a few steps from the beach. Gamble Rogers Memorial Recreation Area is located about half way between St. Augustine and Daytona Beach. The campground has two loops. On the west side of US-1 is a riverside campground on the Intercoastal Waterway. It is very nice.

But our favorite is the loop on the east side of US-1, right on the ocean. Their highly desirable beachfront sites are usually booked a year in advance. But cancellations and early departures sometimes free up a spot and that’s what we were lucky to grab on the several times we’ve visited.Gamble Rogers camping is managed by Reserve America. Keep trying. You’ll thank me if you get a spot.

Boyd’s Key West Campground is one of our favorites for two reasons: One is it’s in Key West, surely one of America’s most fun towns. Two, it has a vibe and friendly ambiance that makes you immediately not want to leave.

It’s been around for decades and there is an awesome community there, as well as the proximity of the water. Some sites back right up on it. Spend a few nights here and you will get ALL your kinks out. The grounds are well-kept and the staff is friendly!

Most of their sites have full hookups, with picnic tables and grills. Other amenities include potable water, flush toilets and showers, firewood, laundry, a pool, WiFi, cable TV and a dump station. Nightly rates are $80-$130, depending on hookups and location to the water. Expensive? Yes. But Key West IS expensive. And Boyd’s epitomizes Key West camping.

This primitive campground is located in the Porcupine Mountains of Michigan’s western Upper Peninsula in one of the largest unspoiled wilderness tracks in the Midwest. The park itself was voted the second most beautiful state park in the country in a survey by USA Today not long ago. I was one of the judges for the newspaper. It is a place worthy of even the most discriminating camper’s bucket list.

The setting couldn’t be more beautiful. Towering virgin timber, secluded lakes, and miles of wild rivers and streams all on the shoreline of Lake Superior. The Porcupine Mountains offer some of the best wildlife viewing in the country. Black bears are common in the Porkies. Wolves can be often heard at night. Other animals include deer, otter, coyote, bald eagles, bobcat,s and, occasionally, moose. Cougars have also been reportedly seen in the park.

If you can make your trip here in late September or early October, you will hit peak color time and trust me, I know of no other places that can top the “Porkies” for autumn color.

This is the state park voted Number 1 in that USA survey I just mentioned. New York’s Letchworth State Park is 14,000 acres in size, located 35 miles southwest of Rochester and about 60 miles south of Buffalo. Often dubbed as “the Grand Canyon of the East,” Letchworth offers easily accessible and spectacular views of a deep, 600-foot gorge carved out of the limestone and sandstone shale by the Genesee River.

Besides the gorge, the park boasts a series of spectacular waterfalls, the three major ones called the Upper, Middle, and Lower Falls, located in Portage Canyon, the southern section of the park, about 10 miles from the 350-site campground. Millions of years of geological history can be observed in the rock formations exposed by erosion.

Swimming pools, fishing areas, hiking trails, hot air ballooning, whitewater rafting and canoeing by permit are just some of the additional attractions at Letchworth. The trails are well maintained and parallel the gorge and take you right up close enough to the waterfalls that you are cooled by the fine mist.

Tell us your all time favorite campground below in the comments.

The Road to More: Discovering Community in Banff 4515