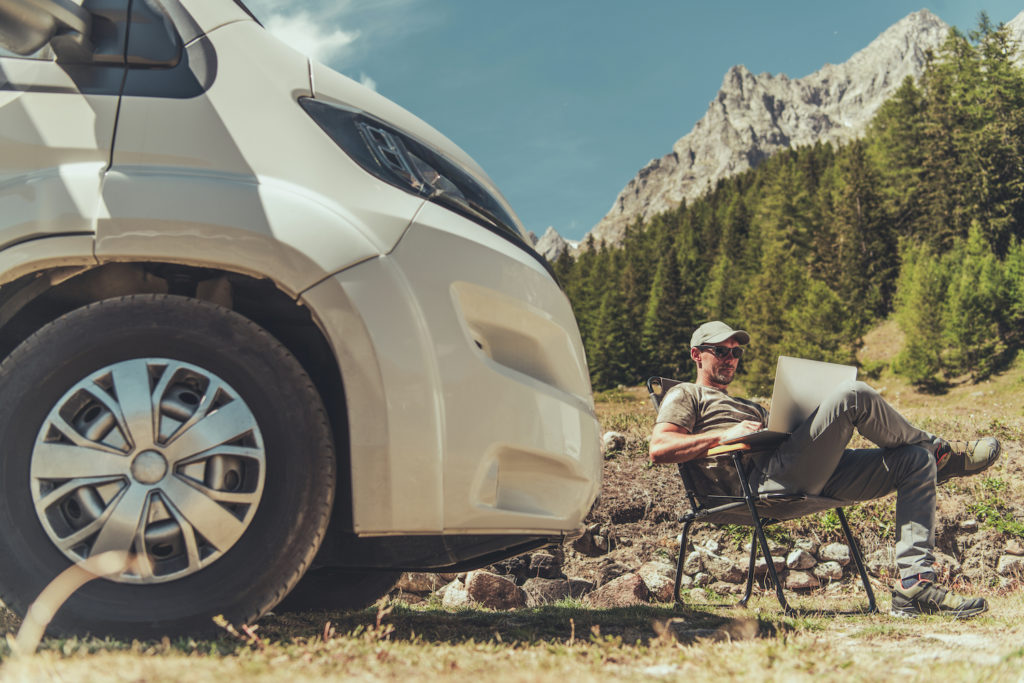 Starlink Internet for RVers is very much a reality these days, making remote workers and boondockers particularly happy. Any RVer who has ever struggled with getting sufficient internet service while traveling is about to benefit from a big change in Internet technology. It’s all due to the work of a company called SpaceX.

Starlink, which recently added two new tiers of service of interest to RVers, offers the potential of solving the congested Wi-Fi and horribly slow or nonexistent Internet that so often plagues RV owners on the road and in campgrounds. Staying connected on the road is a crucial part of the RV lifestyle.

I’ve been a Starlink customer for five months now and can report that while it’s far from perfect — there are growing pains and glitches and sometimes inconsistent speeds — the system works and generally offers broadband connectivity equaling and sometimes exceeding that of 4G LTE and 5G cellular.

While Starlink is a cool new solution for better, stronger Internet access for RV enthusiasts, WiFi systems and cell boosters are still a reliable and affordable way to stay connected while on the road. Having more than one way to stay connected is always a good idea, especially if one connection becomes weaker in certain areas.

There are three main tiers of service:

There is also a business tier but since that applies to very few RVers, we’ll move on. Just know that the Portability and RV tiers have become available in the past several weeks (as of July 2022) and it’s likely as Starlink matures, more service options will be announced.

What Does Starlink Offer the RVer?

Starlink has the potential of being the most dramatic improvement mobile Internet consumers have ever seen, as remarkable as when the Internet switched from dial-up to cable.

Right now, for those with Residential service, their Internet speeds regularly beat cable, leaving even 5G cellular behind. Because so many are subscribing, those home areas open to resident service are rapidly becoming sold out. To keep service stellar, Starlink is “prioritizing” access for residential users, in turn, “de-prioritizing” speeds for RV or portability customers who enter those over-subscribed home areas.

Most of those sold-out areas are in and around metropolitan areas. SpaceX has a mapping feature you can use to quickly zoom to your area to see which areas are available, on a waitlist basis (sold out), or coming soon.

RV and Residential users can, as noted, use Starlink as they camp in those sold-out areas, it’s just that they will likely experience more inconsistent access speeds.

When Will Starlink Internet for RVers Be Available?

Mobile Starlink for RVers Has Some Hurdles

The Key? It’s the Antenna!

In truth, Musk is not the only visionary working on such an antenna. In fact, much of the antenna technology used for Starlink Internet as it pertains to RVers has already been developed.

Kymeta Corp. is the Redmond, Washington-based connectivity venture backed by Microsoft co-founder Bill Gates. A few years ago they installed, and let me test, one of their hybrid satellite-cellular mobile antennas for voice and data. It wasn’t hooked up to Starlink (SpaceX hadn’t even launched its first satellite back then), but Kymeta was clearly looking at that eventually when they hooked us up.

When Starlink Internet for RVers becomes available everywhere, it will be a variation of this style that RVers will have installed on their rigs.

In fact, a few years down the line, you’ll see these flat antennas built right into the roof of your RV or even passenger vehicles. When I tested the Kymeta dish, it was mounted on the rear of my Class B van. It kind of looked like an extra-extra-large pizza box on top of my roof.

Kymeta is currently working with several satellite companies and has not officially announced any deal with SpaceX or Starlink. But you can read between the lines. In a news release, the company says: “We’re agnostic, so we will support all of the different platforms that are out there.”

Obviously, that means they want to work with Starlink, besides the various high-altitude satellite systems it’s currently operating on across the globe.

As we’ve traveled North America in our RV these past five weeks, I’ve regularly set up my system wherever we camped. And I’ve been frustrated by the following:

You might think I’m down on Starlink. Not so!

We will definitely remain subscribers and continue to use it, especially as we boondock. That is where Starlink really shines. In places where there is absolutely zero cellular connectivity, we have been able to set up and connect every time. Because those remote locations tend to be in areas not yet over-subscribed or sold out, our connection is not de-prioritized and we have solid, fast speeds.

I am also impressed with how easy it is to set up. I bought a telescoping flagpole and a couple of brackets that fasten the pole to the rear ladder of our RV. I attach the dish to the pole and then bring the cable from the dish down to the router. Once the router is plugged in, it quickly finds and connects to the Starlink network and makes that access available as a Wi-Fi network to which we can connect all our devices.

Something else I like about Starlink? It keeps getting better. It is big and it’s growing. Starlink calls its system of satellites a constellation. SpaceX says it’s on the way to creating a “mega constellation.” As of July 2022, there are some 2,500 Starlink Internet satellites up there.

SpaceX is now launching them pretty much weekly, with about 60 new satellites being deployed with each launch. When the system is fully developed, Starlink hopes to have 30,000 of them orbiting the earth in perfectly synchronized orbits about 250 miles high, covering precise areas of geography, 24/7, 365 days a year.

The problem is it is not widely available for mobile use and you need lots of equipment, including a big dish that must be precisely pointed in the right direction. Finding room to carry it and then setting it up and taking it down at each stop is cumbersome.

Starlink Will Be the Gold Standard for Mobile Internet

When it does become widely available for mobile use among RVers, it will be screaming fast. Based on its private beta test results, it appears that under the right conditions it can deliver a satellite internet connection of 100 Mbps or more (some beta uses have reported maximum speeds of 200 Mbps at times). That is as fast – or sometimes faster – than your home cable connection.

While 5G cellular technology is technically capable of such speeds if you are right under the cell tower, it is very unreliable for on-the-move connectivity and is many years away from providing seamless nationwide coverage. Latency is not a problem with Starlink. That’s because Starlink satellites are 60 times closer to the earth than traditional Internet satellites. Starlink’s beta testing reports an extremely low latency of 20 milliseconds.

What Does SpaceX Say About Starlink Internet for RVers?

In some online conversations analyzed and tabulated by our friend Chris Dunphy from Mobile Internet Resource Center, the SpaceX/Starling people made it clear that it is coming. Here’s their statement:

Mobility options – including moving your Starlink to different service addresses (or places that don’t even have addresses!) – is coming once we can increase our coverage by launching more satellites & rolling out new software.

Did you catch the “places that don’t even have addresses” part? That’s us! RVers. We are on the move and all they need to do is launch some more satellites to provide better coverage and coordinate them all through some software. The challenge is pretty amazing. In one of the online conversations the company had with fans, I was struck by this explanation of how complicated it all is:

The Bottom Line on Starlink

At the rate Starlink is growing and improving, in two or three years, I suspect all of my above frustrations will be gone. Until then, I think of it as my backup system. For now, cellular is still my primary and most reliable Internet, but in those remote areas where we so love to go in our RV, Starlink is my ace in the hole.

I also find it much better than the Wi-Fi we get at many campgrounds and, on those occasions when we’ve found cellular networks painstakingly slow, Starlink also offers better access. So, while it isn’t quite solid enough yet to replace my cellular Internet devices, it’s only a matter of time.

If you are a full-timer or remote worker who demands Internet access everywhere, Starlink is a no-brainer. It does get through when cellular fails. If, however, you are a holiday or weekend camper and you are camping to get away from work, then stay with what you have and maybe reconsider Starlink a few months down the line. Whether you’re in a new or used motorhome, staying connected is always important.

It’s all good and getting better. Happy Trails!

Have you tried Starlink? Tell us about your experience in the comments below.