This story could save your life or at least your limbs. It’s the true story of a camping accident. It happened while boondocking in Valley Of The Gods, Utah. I’m sharing it with you because it was so eye-opening.

It gave us and our friends pause about an aspect of camping safety that wasn’t on our radar beforehand. It might not be on yours, either.

If you boondock or dry camp all alone, a similar type of accident or issue could happen to you. So, I feel it’s a fitting cautionary tale. Luckily, our story had a pretty happy ending.

The Best Camping Lesson We Will Never Forget

It was a typical moving day. Marshall (my business partner and friend) and I were leaving to hit an Xscapers convergence. We had been in this particular spot with a large group of friends. Others had already moved on. Only a small group of three other friends remained.

Marshall and I were both doing our own thing when it happened. I had zero warning. Putting things away, I heard Marshall calling my name. His voice sounded a bit aggressive, slightly urgent. Never heard him sound like that before.

Alarmed, but still unsure, I started out of my rig to see what was up. A few seconds later came a much more aggressive “Kelly, come here!” yell.

Completely alarmed now, adrenaline rushing, I hurried over to his rig, scared to see what I would find. It wasn’t good. To my horror, Marshall’s finger was ‘stuck’. It was getting crushed under his levelers.

His trailer was already attached to his truck. He had just finished pulling forward to get off the levelers, but they were still pinned down. One of his fingers was now lodged between levelers, unable to come out.

He used a combination of Lynx levelers and Andersen Levelers to get level. His finger was now stuck in between the two.

The Worst Decisions Made While Seconds Counted

In his panic and desperation to get free, Marshall ordered me to “Go move the truck forward!”

Marshall’s panic was now feeding my panic. I jumped into his truck, put it into drive and thought, how much is a little bit? With great fear, I pulled forward about an inch, as instructed. To my sustained horror, he immediately screamed: “BACK UP, BACK UP, BACK UP!!!”

Again, how much should I back up? It was terrifying. Could an inch rip off his finger? His whole hand? I put it in reverse and backed up a smidge. Immediately I heard: “FORWARD, GO FORWARD!!”

This wasn’t helping. In times of panic, you don’t always think straight.

I was following orders from someone in pain and panicked about losing his finger. I figured he knew what had happened so he must also know that moving forward would set him free. Wrong.

In the end, I moved back and forth three times. Guys, the feeling was awful.

Looking back, I wouldn’t have moved the truck without knowing what was going on with his hand. At the time, it felt like time was of the essence.

Thank God, Friends To The Rescue

After my second attempt at moving the truck, I had the sense to yell at our other friends to come and help. They had already been watching: sensing but not sure, that something was amiss.

They immediately came running. I can’t even tell you how happy I was that they were there to help.

In the end, our friend Mark was the inspiration behind Marshall’s brilliant idea. Mark commented: “I wish we could just lift it off your finger”.

Shaking, I ran to my truck and retrieved my jack. We jacked the rig up and Marshall was free. It was a team effort. In the end, Marshall’s finger was stuck for approximately five minutes.

He is pretty lucky he didn’t lose his finger. He could have lost it altogether. It was traumatic for him and I. Terrifying. Exhausting. But it was also eye-opening.

Something dawned on everyone almost immediately after we got him free. We all said, “What if… what if none of us had been here to help?”

The obvious worst case scenario loomed in the air like an ugly valance. Death. Okay, more likely dismemberment, but you get the idea.

If none of us were there, if no-one heard him (which could easily happen in the remote spot we were in), if he didn’t have his phone handy (he didn’t), if he couldn’t free himself (he couldn’t), Marshall could have suffered the most serious of consequences.

This event was a total game changer. It was one of those moments in life that makes you stop and think. If this happens to you, you could die or at the very least suffer injuries you can’t bounce back from.

This was the first time Marshall got hurt in five years of full-time RVing. Still, as you can see, accidents like this one can happen to you or others no matter how experienced you are.

Here are some ideas for safety that you can chew on, so one day you don’t have to chew your arm off to live.

10 Safety Measures For Solo Camping You Need To Know

Here are a few things that we took away from this incident that could save your life or limb if you camp all alone.

Always have your phone handy, well charged, and on you. This might not be practical or possible, so better yet, have a satellite device that allows you to call for help if you’re out of range of cell towers. Keep it on your body at all times.

Also, if you go on a hike, it’s a good idea to carry a battery pack so you can charge your phone. Another option is a solar charger with you. Aside from boondocking, there are many benefits to using solar while RVing.

You had better have the right tools in your truck or RV so you can fix the most common of mechanical issues. Also good is to have some knowledge of basic maintenance and repair. Otherwise, you may have to hike out to the nearest town.

This is pretty much a ‘duh’ category, yet so many people bring nothing. What should you carry with you while RVing? Well, anything you think you could need. If you’re going remote, you should definitely carry:

Always let someone know where you are going and when you are to be back or bring someone along with you. This is especially true if you’re going into an area with bad cell reception.

Another no brainer is if you or someone on your trip needs an epi-pen for allergies. Pack this and keep it with you at all times, especially when hiking.

Different areas of the country have different dangerous wildlife. You need to know what’s dangerous in the area you’re staying in and how you can avoid any issue or what to do if you get into a situation you shouldn’t be in.

Again, this might not be the most practical idea to carry around with you all the time, but it can be helpful to alert others to your presence if you’re injured.

It’s no secret that you should carry some when hiking if you are in bear country. It could also save you from a mountain lion attack or some other aggressive wildlife.

I once read this story of a man who got stranded a mere three miles from a town but didn’t know it. He died, snowed in, staying with his truck for two months. It’s better to have a map and compass and be able to tell where you are.

Make sure you have these things and know how to use them.

You could end up in a ditch, hurt, and nobody finds you for days. Not to be morbid, but these things can happen. It likely won’t but if it does, having the right supplies can mean the difference between life and death.

Plan Ahead and be Smart and You Should Stay Safe

Marshall’s accident involved a respectable and common camping opponent: a 5,700-pound trailer. It was that against his one delicate human finger.

I’m glad, in the end, the finger and the person attached to it won the battle, or at least lived to camp another day. With that said, he may not have won if it weren’t for our help.

Other opponents while camping could be falls, broken bones, bears, mountain lions, getting lost, getting stuck (ask Marshall) and more. You don’t want to get caught unprepared. If you plan ahead, the chances of something bad happening are much, much lower.

Unfortunately, we didn’t get a good one. It was ugly, flat, and crooked from the side. We weren’t sure if his finger would make it, so to speak.

Here, you cannot even come close to seeing how flat his finger was from the side. Oh, how I wish we had taken that side photo after the accident!

Almost a month later, his finger looks fine, and he can use it, but he can’t feel the tip of it anymore. He escaped with very little damage.

Let’s look at the facts. Even though his trailer was hitched to his truck, something shifted as he pulled on his levelers (they weren’t coming out easily).

His truck was in park but his parking brake was not on. Maybe this is how it shifted? Regardless, his finger got stuck between the Lynx and the Andersen levelers after it shifted.

He probably won’t use his hands to try to remove a stubborn leveler again. At the very least, he will be much more careful about the situation. We’re not blaming the levelers or Marshall completely. We can’t.

It was an accident, and accidents are like taxes. They will happen. You need to be ready for them when they do and have a plan to deal with them. It’s also smart to have other people around who can help you out.

I’m not saying camping is inherently dangerous. However, if you’re not prepared, it can be. It’s important to have the right gear and the right rig to ensure you have a safe and fun time.

Have you had a close call or life-threatening accident while you were camping? We want to hear your story in the comments! Tell us no matter how embarrassing or silly it is. Your story could help others keep from making the same mistake! 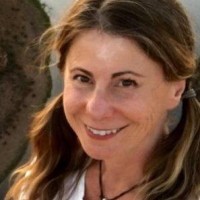 Kelly Beasley Contributor
Kelly roams the west in her 24’ travel trailer with her two tiny dogs Trixie and Gizmo. She started full-time RVing in April of 2015 after being frustrated by “the common life”. In 2017, she created an RVing product education site called Camp Addict with her friend Marshall Wendler. This was a way to help as many other RVers get the information necessary for their RVing needs. Kelly is a full-time solo boondocker and digital nomad, with no end date to living nomadically. You can read about her crazy nomadic life at RvChickadee.com.
web
https://campaddict.com